Disha Parmar is under home quarantine. She also stated that she is strictly following all guidelines that have been issued. TV actress Disha Parmar has tested positive for the novel coronavirus. She took to Instagram to share the news with her friends and fans. In her Instagram story, she said, “As they say there is no right time for bad timing... being positive never was so awful”. 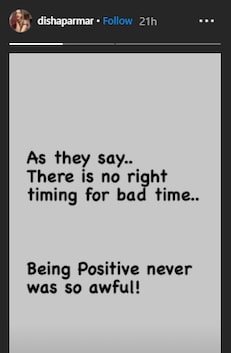 Currently, the TV star is under home quarantine. She also stated that she is strictly following all guidelines that have been issued. In an interview with ETimes, Disha revealed, “My mom tested corona positive around 10 days back. She’s better now and recovering well. But yesterday, I had to get tested because I developed symptoms. My tests came positive."

While the actress is almost asymptomatic, she has a little soreness in the throat and feels fatigued. In the recent past, she had also announced that her mother had tested positive for the deadly virus. Her mother is also currently home quarantine and is undergoing treatment.

She also mentioned how she hopes that the world at large gets rid of the virus soon. Disha also touched upon how it has been a difficult time for the country in general ever since the breakout of the virus.

Meanwhile, Disha is sad for not being able to spend time with her rumoured boyfriend Rahul Vaidya on his birthday. She, however, shared an adorable carousel of pictures with a heart-warming caption on his special day.