Laxmmi Bomb's producer Shabinaa Khan took to her Instagram to share a BTS picture from the shootings in Dubai. The movie is all set to release by November 9 on OTT platform Hotstar VIP. 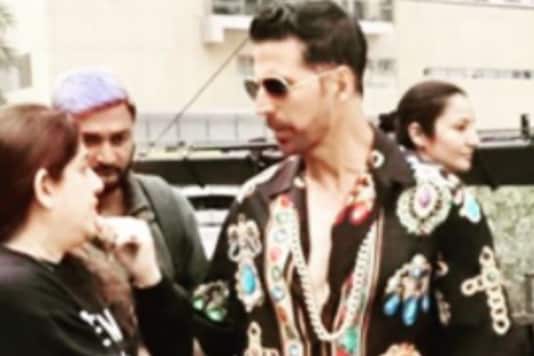 Laxmmi Bomb's producer Shabinaa Khan took to her Instagram to share a BTS picture from the shootings in Dubai. The movie is all set to release by November 9 on OTT platform Hotstar VIP. Trending Desk Last Updated: September 24, 2020, 8:51 PM IST FOLLOW US ON:

Akshay Kumar’s upcoming film Laxmmi Bomb is all set to hit on floors by November 9 on OTT platform Hotstar VIP. Producer Shabinaa Khan took to her Instagram to share a BTS picture from the shootings in Dubai. Sharing the picture, she wrote, “Usual packup time discussions with @akshaykumar in Dubai for a song shoot! We ended up working longer ofcourse. PS: i love my job!!”

In the picture, Akshay can be seen dressed up in a colourful printed shirt while having a conversation with Shabinaa.

The trailer of the film has already been dropped on the internet. The actor also shared the trailer on his Instagram with the announcement of the release date. The caption of the post reads, “Iss Diwali aapke gharon mein “laxmmi” ke saath ek dhamakedar “bomb” bhi aayega. Aa rahi hai #LaxmmiBomb 9th November ko, only on @disneyplushotstarvip! Get ready for a mad ride kyunki #YehDiwaliLaxmmiBombWaali #DisneyPlusHotstarMultiplex.”

In the trailer, Akshay looked terrific in a saree and bindi with his kohled eyes. He will be seen playing the role of a transgender for the first time in this film. He claimed that it’s one of the most difficult characters that he has played. The film is a remake of the hit Tamil film Muni 2: Kanchana directed by the same director, Raghava Lawrence.

The movie will also star Kiara Advani, Ashwini Kalsekar, Tusshar Kapoor and Sobhita Dhulipala. Earlier, the film was scheduled to be released in May 2020, however, it got delayed due to COVID-19 lockdown.

Meanwhile, Akshay is gearing up for period drama Prithviraj based on the life of emperor Prithviraj Chauhan. He will be also seen in Aanand L Rai’s Atrangi Re with Sara Ali Khan and Dhanush.

He is currently shooting for Ranjit Tewari’s directorial Bell Bottom in Scotland. The film will be a spy-thriller set in international locations in the 1980s. The film also stars Huma Qureshi and Vaani Kapoor in lead roles.