Riddhima Kapoor Sahni, the daughter of late actor Rishi Kapoor and Neetu Kapoor, has turned 40 on Tuesday. The jewelry designer's birthday celebrations were made special with the presence of her brother Ranbir Kapoor and cousins Kareena and Karisma Kapoor. Alia Bhatt, Ranbir's girlfriend, also turned up for Riddhima's birthday gathering.

Pictures from Riddhima's birthday party are doing the rounds on social media. It show her dressed in an off-shoulder black top and trousers. Alia wore a floral outfit and gave of breezy vibes. Kareena wore formal wear as she looked stunning in her white shirt and black trousers. The actress is expecting her second child with Saif Ali Khan, who also joined the bash.

Meanwhile, Karisma looked stunning in a printed top and trousers and Ranbir chose to keep it casual in blue shirt and jeans. Pictures of the siblings and Alia posing happily at Riddhima's party are being liked by fans. Riddhima posted happy images from her b'day celebrations on Instagram, as she captioned it, "Family".

Neetu Kapoor and Riddhima's husband Bharat Shani were also snapped at the party. 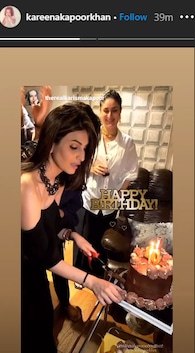 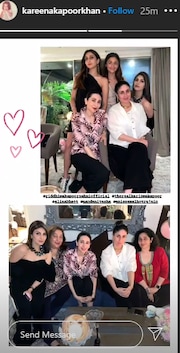 Riddhima also posted a special video that her friends and family members made for her on the occasion of her birthday. It shows a compilation of various short clips wishing Riddhima on her special day.