The researchers explored evolving social biases in the $2.1 billion film industry by analyzing movie dialogues from the last 70 years.

They first selected 100 popular Bollywood films from each of the past seven decades, along with 100 of the top-grossing Hollywood movies from the same period.

They then applied Natural Language Processing (NLP)  techniques to subtitles of the films to examine how social biases have evolved over time.

“Our argument is simple,” the researchers wrote in their study paper. “Popular movie content reflects social norms and beliefs in some form or shape.”

[Read: How do you build a pet-friendly gadget? We asked experts and animal owners]

The researchers investigated depictions of beauty in the movies by using a fill-in-the-blank assessment known as a cloze test.

They trained a language model on the movie subtitles, and then set it to complete the following sentence:

A beautiful woman should have [MASK] skin.

While the base model they used predicted “soft” as the answer, their fine-tuned version consistently selected the word “fair.”

The same thing happened when the model was trained on Hollywood subtitles, although the bias was less pronounced.

The researchers attribute the difference to “the age-old affinity toward lighter skin in Indian culture.”

The study also evaluated the prevalence of female characters in films by comparing the number of gendered pronouns in the subtitles. 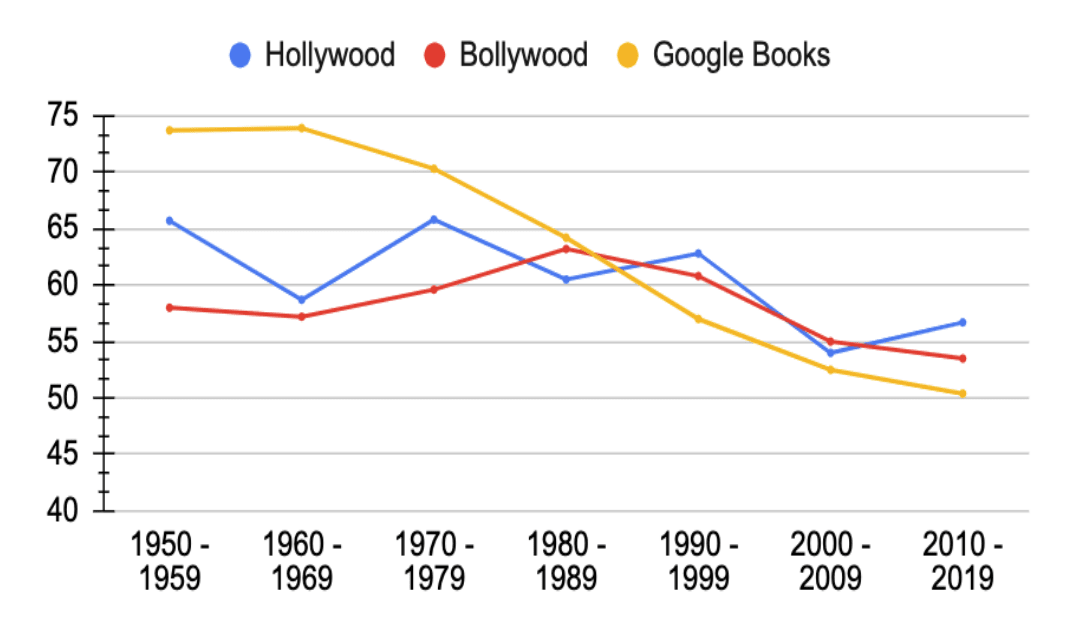 The male pronoun ratio in both film industries had dipped far less that a selection of Google Books that were analyzed.

The male pronoun ratio in both film industries has dipped far less that a selection of Google Books that were analyzed.

The male pronoun ratio in both film industries had dipped far less over time than a selection of Google Books. The researchers also analyzed sentiments about dowry in India since it became illegal in 1961 by analyzing the vocabulary with which it was it was connected in the films.

They found words including “loan,” “debt,” and “jewelry” in movies of the 1950s, suggesting compliance with the practice. But by the 2000s, the words most closely associated with dowry were more negative examples, such as “trouble,” “divorce,” and “refused,” indicating non-compliance or more gloomy consequences.

“All of these things we kind of knew, but now we have numbers to quantify them,” said study co-author Ashiqur R. KhudaBukhsh. “And we can also see the progress over the last 70 years as these biases have been reduced.”

This article has been aggregated from thenextweb.com and they maybe/are the copyright owners of the same. If you are the Author/Copyright owner of this article and want us to remove the same then send an email to admin@fordiva.com so that we can delete it immediately. We sincerely regret and apologies for any inconvenience caused to you due to the same. Though it is your decision but please take note that the link to your website and the article have been given above, within and on the bottom of the article.