Christian Siriano Splashes Down in Connecticut for Spring 2021

The designer invited an intimate crowd to his home for one of the few live shows at New York Fashion Week. 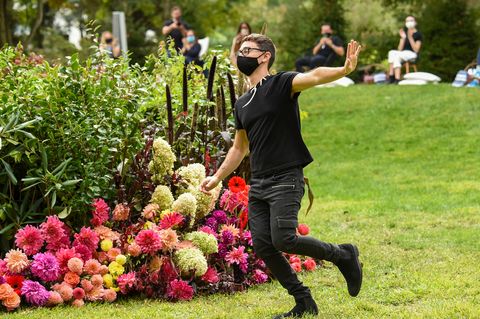 It wasn’t supposed to be this way.

In another dimension—the one where science isn’t “an opinion,” where health is a human right, where Quibi is the name of a celebrity baby instead of, like, whatever it is—Fashion Week would be moving right along. There would be triumphs and trends, breakout faces wearing sponsored mascara, and the occasional “that didn’t need to be a show” sigh from weary editors on a micro-drip of cold brew and chunky accessories. In other words, the jagged bliss of our jobs. 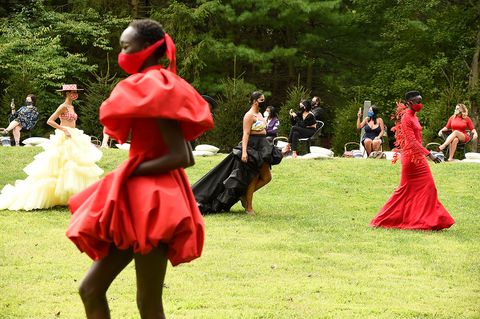 Instead, here we are in a more twisted timeline, exclaiming “it’s so good to see you!” even though half our faces are covered. And that’s where Christian Siriano pops into view. (For real though—at the show he seemed to appear magically from behind a tree in his backyard, yelling “it’s so good to see you!” while wearing a mask—one of the 750k he’s created for frontline workers since the start of the pandemic.)

Along with helping solve this dimension’s PPE shortage and making TikTok videos with Sarah Jessica Parker, the 34-year-old designer has been doing exactly what the rest of us have: binging old movies in his PJs. “Comfort viewing is a very real thing,” he says, “and for me, that’s Don’t Tell Mom the Babysitter’s Dead.” The 1991 comedy stars Christina Applegate as a high school senior pretending to be a fashion executive. Its glorious finale has a bunch of giddy teens wearing Balmain-meets-Burger-King versions of fast food uniforms on a catwalk made from pool floats. And for many current millennials—Siriano included—“it was the first time I ever saw a runway show, or even realized that fashion could be a job.” 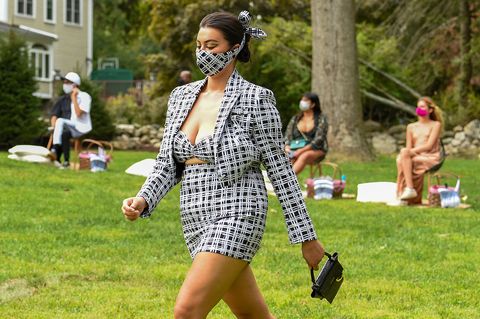 Or in the case of Siriano’s latest collection, a great job. Along with expected (and exquisite) confections like lipstick-red poufs and pink princess skirts, there were flare-kick pants and cropped plaid blazers that could perk up a dreaded Zoom meeting pretty fast. See also: a black lace corset with a thighbone-bearing skirt for maximum Hailey Baldwin vibes (and a brief pang of party withdrawal for the Ghosts of Wang Fests Past). Of course there were Emmy Award options because the show is still happening (sort of, somehow…) on Sunday, along with bombshells like Lauren Chan and Sabrina Karlsson, who was dressed like a Connecticut Persephone in yellow chiffon and sooooo many daisies. (An ode to Drew Barrymore, who filmed a segment with Siriano for her new talk show?) 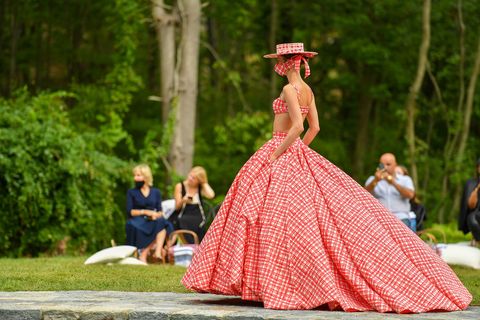 Then there was Coco Rocha, who closed the show in a scarlet body-con gown while pregnant with her third child. (Mazel Tov, Coco!) “It’s the only show she’ll get to do this season with the baby in her belly,” sighed Siriano. “So we wanted to make it special.” So did Rocha—she stepped into his swimming pool for the grand finale, swam the backstroke… and then had to be pulled out by the atelier assistants, because have you ever gotten a multi-layered couture gown sopping wet? Even the hardcore CrossFit attendees among us could never. And though the move was very reminiscent of Shelley Long’s pool dive in Troop Beverly Hills (another favorite of the designer), Siriano swears it wasn’t choreographed. “To be honest, we told her to be free—Coco is such a muse, and I trust her completely in my clothes—but I had no idea what she was going to do!” said the designer after the show. “It certainly wasn’t planned—but what has been this year?”

In that other timeline, Rocha would have somehow emerged from the pool like an X-Men goddess, posed while sopping wet, and been air-lifted by a helicopter sponsored by an energy drink. In this one, Christian Siriano took his bow while laughing, surrounded by women of all body types and skin tones, as an audience of die-hard fashion folk clapped, ‘grammed, and smiled broadly, because it was a beautiful day and there were beautiful things in it—even if those things needed help to get out of a saltwater swimming pool before they could keep going.

So wait, maybe it was supposed to be this way? Anyhow, onwards.

Faran Krentcil Editor at Large, ELLE.com "Her beauty and her brain go not together." —William Shakespeare