When Jagriti Eadala found out she was pregnant in February, she and her husband celebrated by going on a holiday. It coincided with their anniversary and Covid appeared to be on the wane in India.

But within a month, the 29-year-old found herself cloistered in a room, scared to step out. The virus had returned with alarming ferocity. Her husband had to continue going to work, so she isolated herself from everyone in the house.

By then, India had begun vaccination against Covid but that was not an option for Jagriti. It still isn't because the jab has not been approved for pregnant women in the country. The government recently cleared it for nursing mothers, but there is no word on what pregnant women should expect, leaving them anxious and scared.

"I had Covid in November and I have good antibody levels, but my doctor said I need to be very careful. I am pretty paranoid," Jagriti says, adding that she knows of someone who was nine months pregnant when she tested positive for Covid. The baby was born by C-section but the mother had to go on a ventilator. She survived but, Jagriti says, stories like this frighten her.

There are many such stories, too often with a heartbreaking end. A 35-year-old man in Delhi lost his wife to Covid, two weeks after she delivered a baby girl. He says he is still in shock, unable to fathom how he is going to parent his three children - he has two young daughters - without the "wonder woman" by his side. "Don't take corona lightly," a young Covid positive doctor said, struggling to speak in a video that was shared after she died of the infection. She was seven months pregnant but the baby had died in her womb the day before.

Studies have shown that Covid positive pregnant women, compared to non-pregnant women, are at higher risk of dying from the virus. They are also more likely to be admitted to the ICU, hooked to an invasive ventilator, develop dangerous pregnancy complications or deliver prematurely.

Hundreds of pregnant women have reportedly died of the virus in India but there is no official data. The situation is likely far worse in rural areas, where poor surveillance, delayed testing and spotty access to critical care has led to a high death toll from the virus. 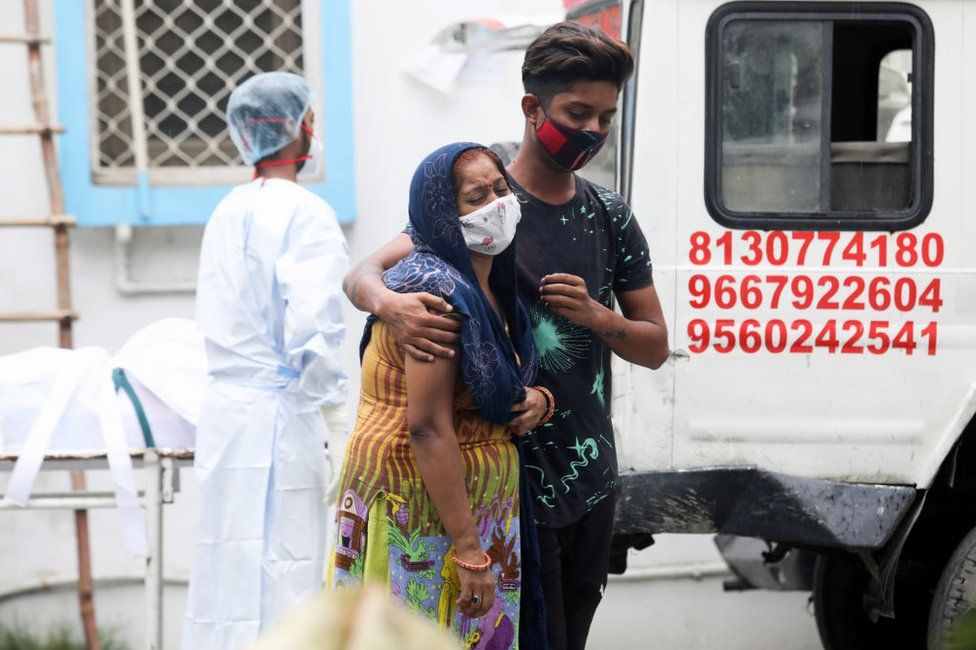 Could the vaccine have saved them?

"In my opinion, the vaccines were developed quickly for the right reasons - but it usually takes 10 years before most vaccines are declared safe for pregnant women. The government is trying to play safe. But there is no decision yet and millions of pregnant women are very vulnerable. We hope to get a positive response from the government soon," says Dr Meenakshi Ahuja, director of obstetrics and gynaecology in Delhi's Fortis La Femme hospital.

India's federation of gynaecologists too has recommended that pregnant women be allowed to consult with their doctors and decide.

Immunity is generally compromised during pregnancy but Dr Ahuja says Covid positive pregnant women are especially vulnerable in the third trimester. The growing uterus pushes against the diaphragm, compressing the lungs and making it harder to breathe in a normal amount of air.

"So the first thing we try to do is to deliver the baby even if it's premature," Dr Ahuja says. "That is one reason why we have seen a rise in neonatal deaths."

People wait to get inoculated with a dose of the Covishield Covid-19 coronavirus vaccine at Radha Soami Satsang Beas Centre in Amritsar on May 19, 2021.image copyrightGetty Images 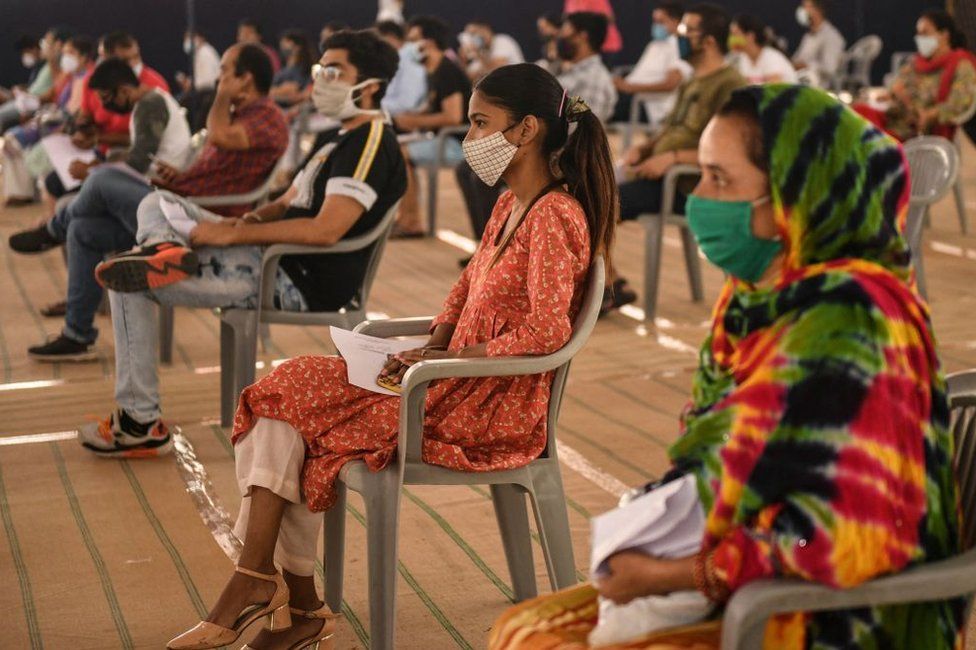 The other concern is the delivery itself.

"A vaginal delivery requires the woman to lie down on her back. Lying down straight pushes the diaphragm and the lungs further up, lung capacity reduces and her oxygen levels are likely to drop," says Ruma Satwik, an obstetrician at Delhi's Sir Ganga Ram hospital.

She adds that pregnant women with mild or no symptoms need not panic - but among the "smaller subset" who are admitted with a moderate to serious infection, the "mortality rates appear to be higher than what it would be in pre-Covid figures".

"We hadn't seen a single mortality the first time around [the first wave]. This time it's been much worse."

A health worker administers a dose of the Pfizer-BioNtech COVID-19 coronavirus vaccine to a pregnant woman at Clalit Health Services, in Israel's Mediterranean coastal city of Tel Aviv on January 23, 2021.image copyrightGetty Images 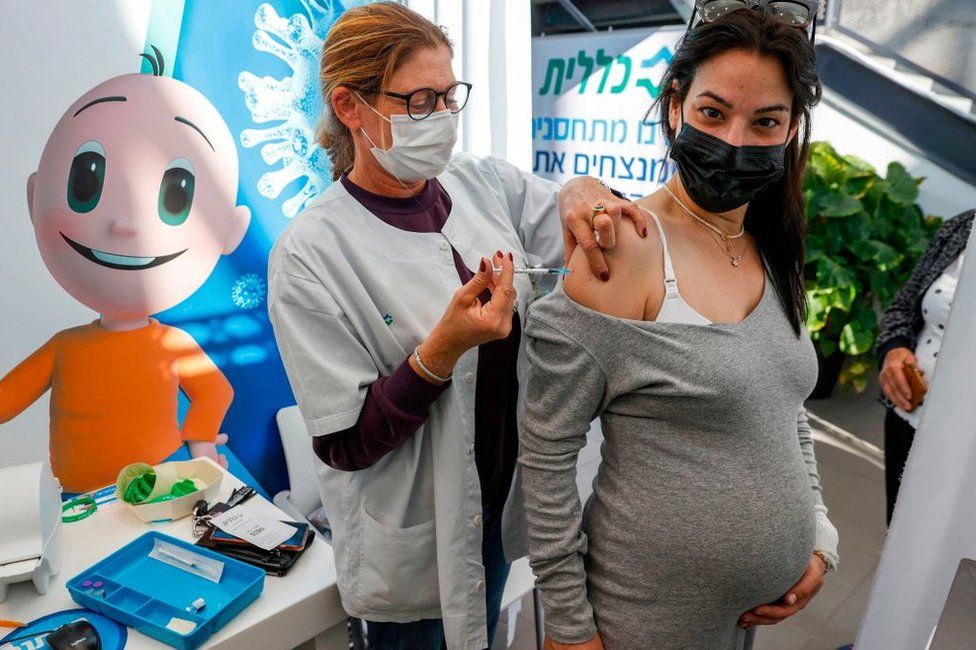 Dr Satwik says she is still unsure of recommending the vaccine to her patients in the absence of any clear data or studies - she points to the fact that Covishield and Covaxin, the two jabs that India is currently administering, have not been tested on pregnant women.

Last month, Brazil suspended Covishield for pregnant women after a woman who had taken the shot died. Some countries have also stopped giving it amid increasing reports that it was linked to blood clots.

This is also a fear among gynaecologists because pregnant women are at higher risk of developing blood clots, Dr Ahuja says.

The countries that are vaccinating pregnant women - US, UK, EU, Australia - are giving the Pfizer or Moderna vaccines, both of which have been deemed safe by a major new retrospective study.

But in the absence of vaccines, critics say, India's federal government appears to have no strategy for treating pregnant women - only a handful of hospitals in big cities are even admitting them if they are Covid positive. The government failed to prioritise pregnant women - who number in the millions each year - as a high-risk category early on. Doctors now fear that they will still be at a disadvantage as delays and prohibitive costs prevent most Indians from getting a jab.

Those who can afford it are looking for alternatives - the BBC spoke to one family in Delhi who say they went to the US to get the woman vaccinated because they couldn't wait endlessly.

"To be very frank, there is no protection for pregnant women or lactating mothers," says 29-year-old Avni Reddy.

She and her four-month-old baby were diagnosed with Covid in April. They recovered after mild symptoms, but Ms Reddy says she was just given a pain killer because she couldn't take anything stronger while breastfeeding.

"I was lucky because the infection was mild, But what if I had a severe infection?" 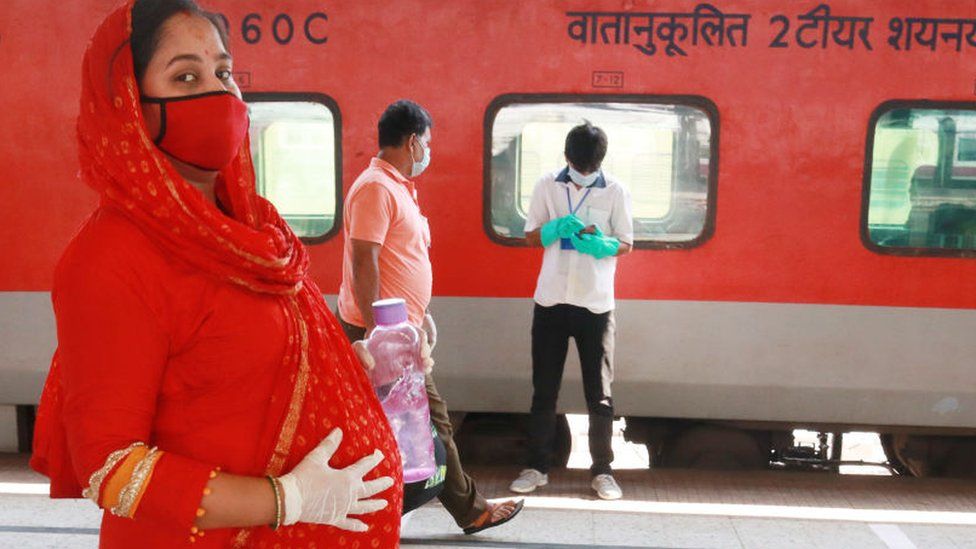 This article has been aggregated from www.bbc.com and they maybe/are the copyright owners of the same. If you are the Author/Copyright owner of this article and want us to remove the same then send an email to admin@fordiva.com so that we can delete it immediately. We sincerely regret and apologies for any inconvenience caused to you due to the same. Though it is your decision but please take note that the link to your website and the article have been given above, within and on the bottom of the article.