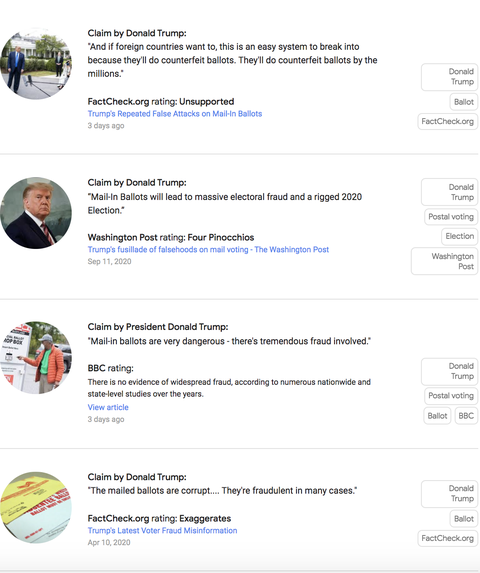 The year is nearly over, but we're only just now getting into the thick of election season. With the November presidential election quickly approaching, Joe Biden and Donald Trump will go head-to-head in a series of debates. (Kamala Harris and Mike Pence will also face off on October 7 in Salt Lake City.) The first debate kicks off at 9 p.m. EST, but it's crucial that you—yeah, you!—prepare to fact check before the candidates even take the stage.

Sadly, with politics come too many blatant lies, untruths, fallacies, fairytales— whatever you want to call it. It's a problem! Chris Wallace is the moderator tonight, but while many Americans would probably find it helpful if he pushed Trump and Biden to be factually accurate, that won't be the case. "My job is to be as invisible as possible," the Fox News Sunday anchor said, adding, "I do not believe it is my job to be a truth squad. It’s up to the other person to catch them on that."

Since Wallace will focus on moderating and not fact checking, voters will have to hope Biden and Trump hold each other accountable... 😬 There's only so much time for them to answer each question, and you already know how debates and American politics are, so that's easier said than done. This means it's up to voters and journalists to do the hard work of double and triple checking any claims made.

Even if you already know who you're voting for, it's still important that you do your own research to help yourself (and others!) who may encounter misinformation. Don't sweat it, though. You don't have to have an encyclopedia on hand because these outlets, search engines, and nonprofits are going to be your best lie-detecting friend tonight:

As PolitiFact has stated, these debates are basically like their Super Bowl—they've been training for this since they began fact checking presidential politics in 2007. If and when either candidate decide to embellish or straight-up lie to American voters (which, let's be honest, will probably happen), these Poynter Institute journalists will call it out in real time. Sign up here to get a link for their fact checking ahead of tonight's debate or follow along on the PolitiFact website and Twitter. More info on how they get it done and rank statements on a scale of true to pants-on-fire, right here:

BTW, if you hear something fishy and can't find any information on the claim through your own research, you can directly email PolitiFact at truthometer@politifact.com and ask them to investigate. Chances are if you have a question, so do a bunch of other people.

For quick answers to questions like, "Did Jared Kushner Delete Tweets After News Surfaced About Trump’s Taxes?" (no) or "Did Biden Disparage Troops as ‘Stupid Bastards’?," (also no), Snopes has it covered. Founded in 1994, Snopes has been working against misinformation for decades and doesn't engage in political advertising or accept funds from political parties, campaigns, or advocacy groups.

This Fact Checker column ranks lies on a scale of Pinocchios. (For those who need a refresher on the Disney classic and Shrek character, the puppet's nose grows whenever he lies...or pretends like he's not wearing ladies' underwear.)

So when Eric Trump's tweet implied Biden was using a teleprompter when he wasn't, The Washington Post gave him a score of four long-nosed Pinocchios. A Trump campaign ad that spliced together bits from 10 different video clips to concoct a misleading representation of Biden's relationship to China also scored four Pinocchios. When Biden claimed Trump's tax bill provided "a reward for offshoring jobs," the outlet gave him two Pinocchios. You get the point! Keep an eye on this column to debunk any outrageous statements made tonight with a side of clever emojis.

FactCheck.org works with the Annenberg Public Policy Center, the University of Pennsylvania communications and media research center, to debunk information spread online and by political figures. There's a whole section on their website dedicated to the election and identifying fake news.

Did you know Google has a whole branch of its search engine that was designed to pull articles that relate to fact checking popular searches? For example, searching "Donald Trump voter fraud" will return results from The Washington Post, FactCheck.org, and BBC among others. On the results page, Google will clearly display the claim, who made the claim, the fact-checking publication, and a determination, which can include labels like "exaggeration," "mixture," "false," and "ridiculous." Try it out with some claims you've heard before the debate to get a sense of how it works.

Aside from these dedicated sources for you to keep track of, the Associated Press has a fact-checking hub, and The New York Times and Politico often do live fact-checking during major political events, so keep an eye on their sites for any updates.

Plus, you can follow reputable journalists on Twitter to help you determine if what you're hearing is factually correct and not just a way to pull on your heartstrings or stoke fear and rage. Some national reporter suggestions for your follow list: Yamiche Alcindor, April Ryan, Monica Alba, Seung Min Kim, and Marshall Cohen. Just to name a few.

Now that you have some of these tools in your back pocket (and in your Bookmarks folder, I hope!), you can quickly investigate if what you're hearing is factual and nip any lies in the bud.