Everything You Need to Know About ‘Bachelorette’ Contestant Yosef Aborady

Apparently, he had some “choice words” for Clare Crawley. 👀

Up until recently, Clare Crawley’s season of The Bachelorette was something I planned to gently fall asleep to while drunk on the couch in a state of mildly interested boredom. Little did we all know that her season would end up being a messy dream come true. For one, it’s not even Clare’s season anymore. Tayshia Adams is now Bachelorette after Clare allegedly quit the show after just 12 days to be with contestant Dale Moss. But that doesn’t mean there wasn’t drama. In fact, it sounds like plenty of sh*t went down during those 12 days, in part thanks to ABC’s editing of Clare’s relationship with Yosef Aborady. Here’s what you need to know about the dude Reality Steve has already dubbed a “villain.”

According to Reality Steve’s next-level sleuthing, 30-year-old Yosef is from Mobile, Alabama, where he’s a territorial manager for Northfield Medical. He also happens to be a casual model in his free time, and thanks to his agency, we know important things like his suit size. 42 regular for everyone asking!!!!!!

It appears as though Yosef made a website right before going on The Bachelorette, and some fans think the timing indicates that he went on the show for the wrong reasons. TBH, tons of people have websites and Yosef was a model pre-Bachelorette—so getting into the lifestyle industry seems like a natural progression? Either way, a Bachelor fan forum went ahead and took a screen grab of the site before it went private... 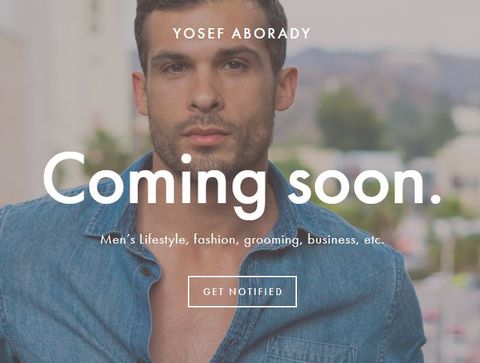 He Has Been Married Before and Has a Daughter

Yosef and his ex married in 2012 and are currently (obviously) divorced. They share a 4-year-old daughter together, but we won’t be dropping any names/pics of the fam here because lord knows they didn’t ask to be involved in this franchise!

In other words, looks like ABC might be giving Yosef ye olde bad-guy edit. Here’s what Steve wrote on his blog:

“The early season villain is Yosef Aborady. From what I’m hearing, the guy had some choice words for Clare. Not sure what about, but it’s not going to look good. And yes, he has a daughter, so lets [sic] keep that in mind when this plays out.”

And in a follow-up report, Steve dropped a major spoiler and said Yosef was eliminated before one of the only three rose ceremonies Clare held. Steve wrote that Yosef somehow had beef about a group date that he wasn't even a part of, "called her names," and was "all around rude to her." Not mincing words, Steve added that "he sure sets a horrible example this season." Yiiiiiikes. Mess. That's what this sounds like. Absolute mess!

We’ll be adding more info about Yosef as fans inevitably uncover more dirt, so stay tuned for updates as we get closer to Clare/Tayshia’s season of The Bachelorette!