Fall Fashion, Through the Eyes of 2020 Graduates

13 photography students from this year's graduating class put their spin on the season's collections.

The students who graduated this summer have never faced a more uncertain future. As they navigated the new quarantine normal, we invited college photography graduates from around the country to showcase their skills in the form of fashion images. The models were their nearest and dearest—parents, roommates, siblings, significant others—who were excited to don high fashion for this shoot. For Parsons grad Daveed Baptiste, it was a chance to pay tribute to his mother, Marie. After he immigrated to the U.S. from Haiti, the two were separated for years, but they’ve now reconnected in New York, where she works as a home health aide. “She was going to work almost every day,” he recalls. “I wanted to make her feel special, so one afternoon after she came home from work, I asked if I could photograph her for this issue.” NYU’s Anna Betts enlisted her quarantine pod to bring her images to life. “Being able to photograph these clothes gave me the confidence to think outside the box,” she says of her first-ever fashion shoot. Given the richness of this talent pool, we don’t think it’ll be the last. 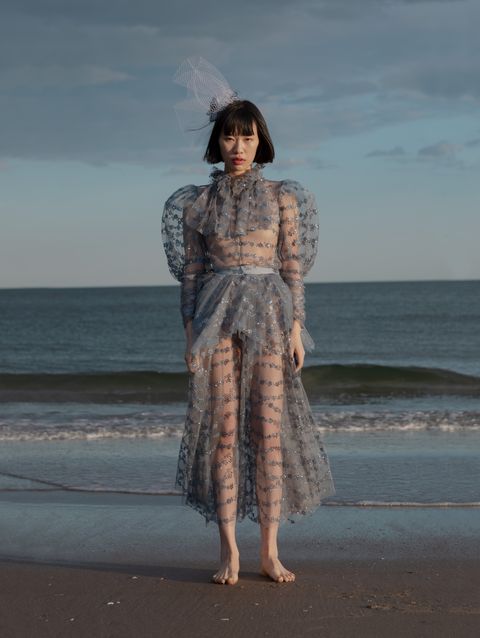 “As an immigrant and a dual-cultured artist, I aim to tell diverse stories,” says Ouyang, who received a “socially acceptable” degree in education back home in Shanghai before relocating to New York to study photography. “I chose to shoot with an Asian model at a location that carried my original fantasy of the American landscape: on a sunset-bathed Coney Island beach, a figure that is defined by the hyperbolic design in an empty seashore. There is a relationship between substance and void.”

Spiegel draws inspiration for her photography from the movies she watches, and is focused on “amplifying female narratives by highlighting women in roles from which they have been largely excluded in the past.” Spiegel shot this image in her Long Island hometown, with her sister Alexa serving as her model. “I wanted to create a fashion image that still had some sort of narrative,” she says. “I went about taking this photo as if I were creating a film still, and I directed my model to stare longingly off into the seemingly isolated and secluded landscape.” 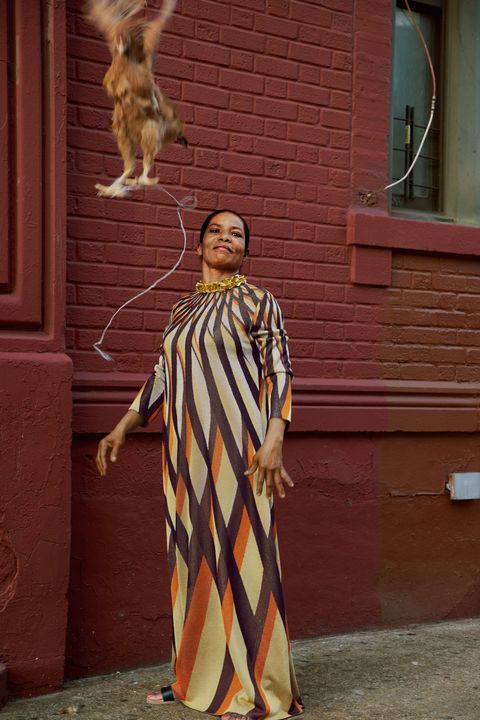 Dress, Gucci. Her own sandals.

Baptiste chose his mother, Marie, a home health aide, as his model. In his native Haiti, “it’s natural to see farm animals mingle with city life, like a chicken running through traffic. For this shoot with my mother, I wanted to bring that same energy to Brooklyn,” he says. “For me, this shoot was about creating something with my mother and spending some creative time with her. When the shoot was over, she wanted to keep all the pieces. She wanted everything.” 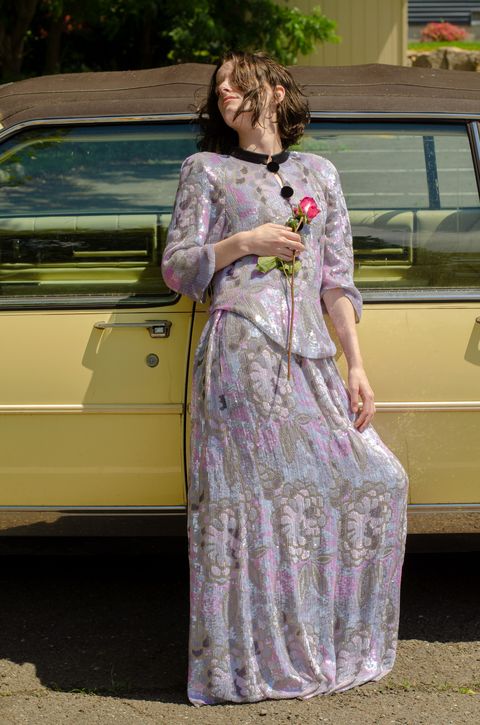 “When photographing models, I like to immerse them in nature,” Kim says. “I grew up in Palisades Park, New Jersey, and I think greenery and foliage just bring peace and comfort to anyone. I see the outdoors as nature’s sculptures, so I thought it would be interesting to incorporate fashion and a subject into a quiet, green suburban landscape.” It’s a theme Kim hopes to keep constant in her photography. 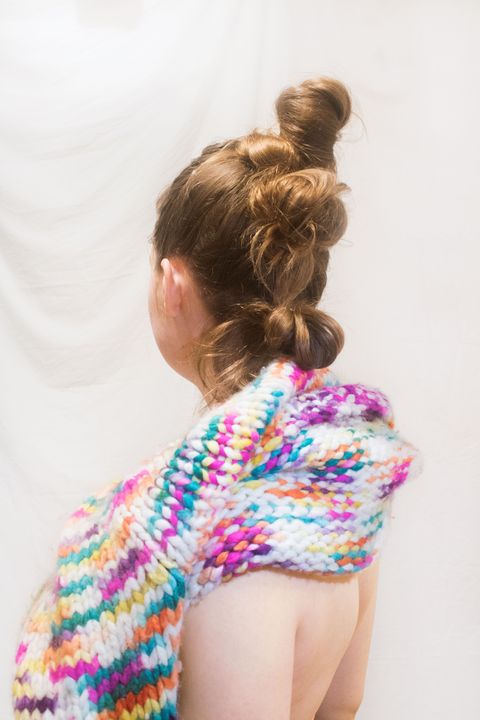 “I was lucky to be quarantined with my best friend, Lu Carter,” says Suarez, who has been “addicted” to capturing memories since her sophomore year and shot this image in New York’s Madison Square Park which was one of the few nearby spaces one could go for some fresh air during the height of the pandemic. “We’ve both channeled our inner child during uncertain times, and I’ve coped with it creatively by reverting to my adolescence.”

“I’m from the most beautiful place in California,” says Borden, who grew up in Mill Valley, spent a lot of time outdoors, and received her first Canon Rebel camera for Christmas at age 11. “I didn’t realize how much I took it for granted, but being in quarantine really solidified my feeling of being disconnected with nature. Constantly shooting in a studio in New York City feels so cold, unnatural, and stale, so I went to the Jersey Shore,” said Borden, shortly before embarking on a cross-country road trip in search of more creative fuel. 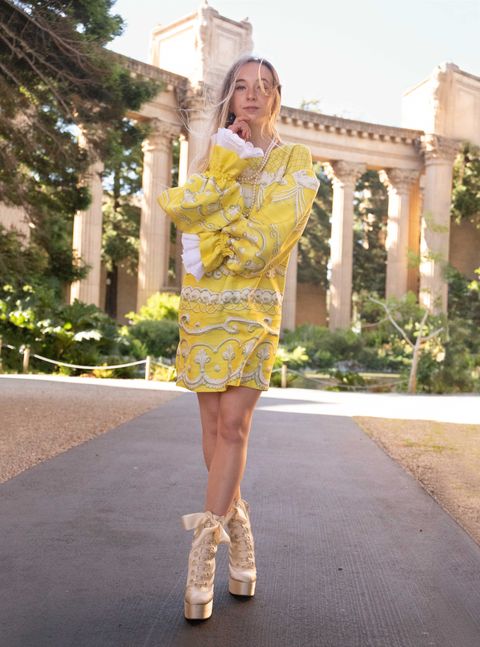 “I chose my friend Katherine Kamin, whom I’ve known since high school, to be my model,” Shuan says. The two love going on “explorations and adventures around the Bay Area,” including the Palace of Fine Arts, a favorite haunt. “Sometimes we’d go out to take photos of each other. I decided to choose her as a model so it would feel just like old times.” With this image, Shuan wanted to capture her friend’s spirit. “She has a very outgoing and bubbly personality but is also serious about her goals, desires, and dreams.”

“My focus in my work often relates back to ideas of mental health, queerness, intimacy, gender, and identity,” says NYC native Nelson, who chose their girlfriend Jolie as their subject and utilized bold, primary colors in everything from furniture to makeup in order to bring the image to life. “I think visibility of people of color and queer-identified people is important,” says Nelson. “For me, photography has been cathartic in understanding my own self and identity, as well as working through trauma, and I feel it is important to create representation for people who are often left unseen.”

“I like my work to have a timeless, painterly aesthetic,” says Glazier, whose work is inspired by Renaissance paintings, surrealism, and Roman sculpture. For this portrait, shot in her New York apartment, “I imagined a woman lost in her thoughts as she explores a grand world around her. She could be from another era or today; the experience is the same.” 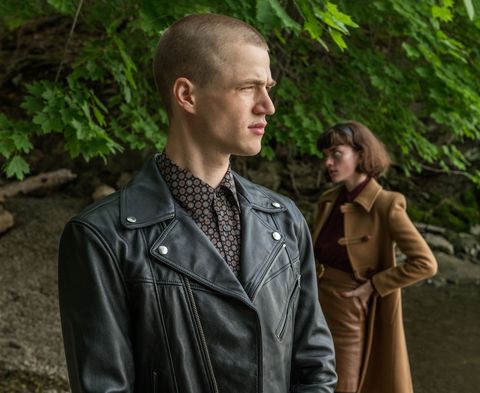 “My practice, for the most part, centers around the convergence of information, fiction, and history,” says Aronson, who photographed his friends Aurora and Henry near his alma mater’s campus in Annandale-on-Hudson, New York. Aronson credits the lush landscape and rich history as a source of inspiration. “I believe that pictures don’t depict history or a moment in time, but rather challenge it. They act as a road map for the future. They are tarot cards in a sense, informing how we subsequently see the world and the next [set of] pictures.”

Negron chose to depict her friend Veronica, a nonbinary student sheltering in place in a van after feeling unwelcome at home. “Veronica wanted to create a home that would allow them to freely be themselves and to chase any opportunities that would come their way. Buying a van and converting it into a home became the next logical step.” For this portrait, shot in Harriman State Park, Negron asked herself, “How can one stay at home when home is not a welcoming place?” She adds, “I know the hardships Veronica faces are not unique, and I hope to bring light to the issues so many are experiencing during this unprecedented time.” 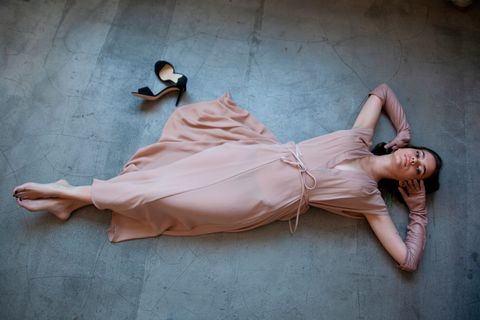 Betts, who minored in political science at NYU, says, "I am always eager to incorporate an element of politics or political activism into my work." She has been focused on different types of portraiture, and recently completed a project called “Love & Rage: The New Faces of Climate Activism,” documenting young climate activists in New York. Her aunt and uncle’s Chelsea architecture studio served as Betts’s makeshift set for this image. She shot her fellow 2020 grad Annalisa Garofalo there, with assistance from her friend Sam Delaney and boyfriend Kevin Ford, also in the NYU class of 2020. Having her quarantine group with her “made the whole project more personal, fun, and exciting,” Betts says. “I was able to share this moment with them.”

Wang started out as a landscape architecture student before finding her true medium. “Photography is the interface where my inside and outside worlds meet,” she says. For this image, she photographed her roommate in Rhode Island’s Colt State Park. “The running girl in the image is not me, but it is still my self-portrait,” she says. “The girl running into or being devoured by another world visually describes my transition between the two.”

This article appears in the September 2020 issue of ELLE.

GET THE LATEST ISSUE OF ELLE