Warning: Spoilers for 'Lovecraft Country' through episode 5 (which aired Sunday, Sept. 13) below. Each episode of "Lovecraft Country" is almost like its own movie, with the thrilling (and gory) sci-fi mythology threading throughout. But the day-to-day dangers and brutalities of racism are the ...Continue reading 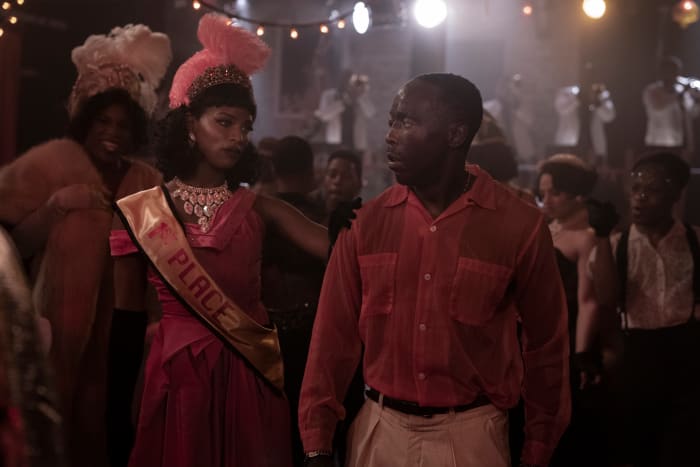 Warning: Spoilers for 'Lovecraft Country' through episode 5 (which aired Sunday, Sept. 13) below.

Each episode of "Lovecraft Country" is almost like its own movie, with the thrilling (and gory) sci-fi mythology threading throughout. But the day-to-day dangers and brutalities of racism are the real horror story in the Jordan Peele, J.J. Abrams and Misha Green adaptation of Matt Ruff's 2016 novel, which turned the works of known racist and anti-Semite H.P. Lovecraft on its head.

Even though the HBO series is set in the Jim Crow segregation era of the 1950s, the over-arching themes are tragically more significant than ever, 70 years later. As Jurnee Smollett, who plays Letitia "Leti" Lewis, told The Hollywood Reporter: "We're telling the story of heroes that go on a quest to disrupt white supremacy, and it's maddening that in the year 2020 it's still relevant." 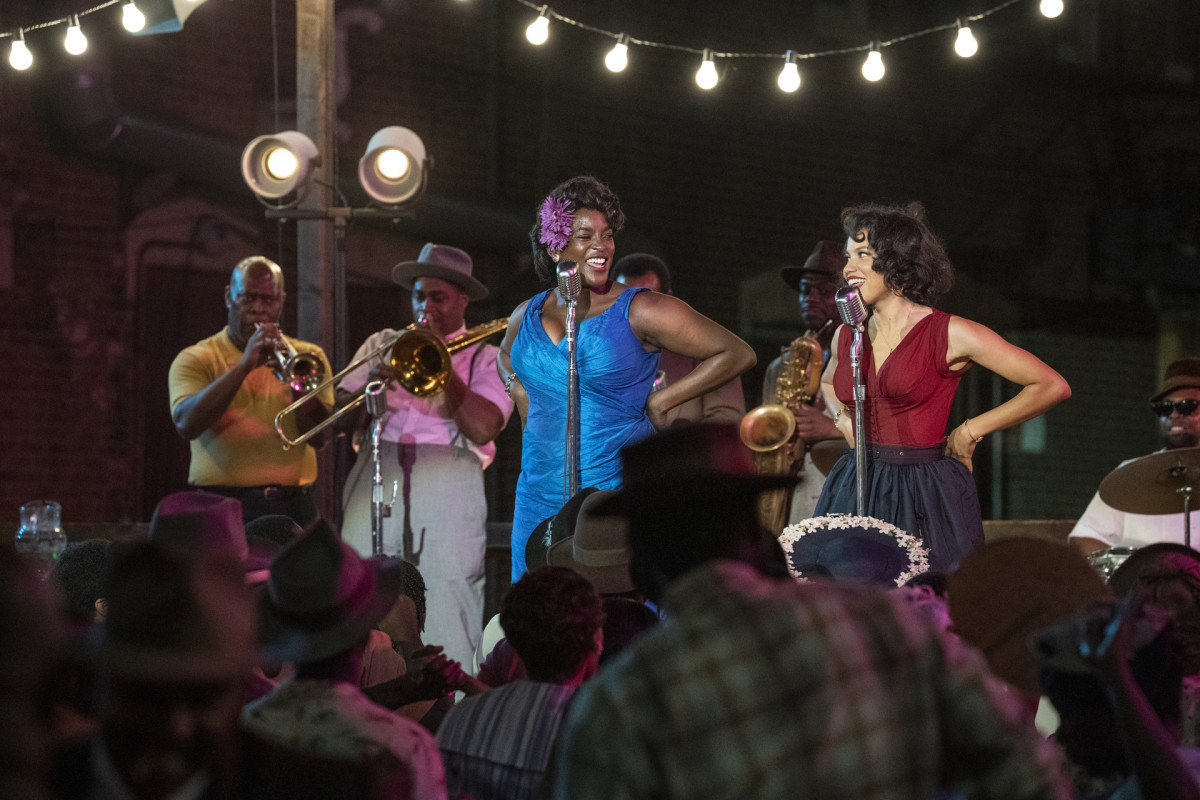 The costumes by Dayna Pink help highlight the rage, terror, frustration and exhilaration as Leti, her sister Ruby Babtiste (Wunmi Mosaku) and childhood friend and military vet Atticus "Tic" Freeman (Jonathan Majors) navigate their journeys. Similar to the mix of horror, sci-fi and real history, their wardrobes combine period authenticity with subtle fantastical elements — when the story calls, of course.

Considering Leti's edge-of-your-seat plotlines and travels, it's understandable that she never wears the same outfit twice. But that's also because she dresses strategically for the specific moment, environment and goal at hand — starting from her first appearance in her siren-red, plunged-neckline blouse and nipped-waist, fit-and-flare silhouette (above). The prodigal daughter returns to Chicago's South Side and immediately vies for the spotlight with Ruby, who's belting out Sister Rosetta Tharpe's "I Want a Tall Skinny Papa" at a block party.

"[Leti] shows up and there's nothing subtle about her," says Pink.

For her ill-fated drive to Ardham with Tic and Uncle George (Courtney B. Vance), Leti's bright pedal pushers, halter tops and sailor shorts — all with heels — are her version of "fashion meets function." But for an overnight visit to her disapproving brother, she changes into a more girlishly conservative crocheted knit dress with ruffles and bows and head wrap. 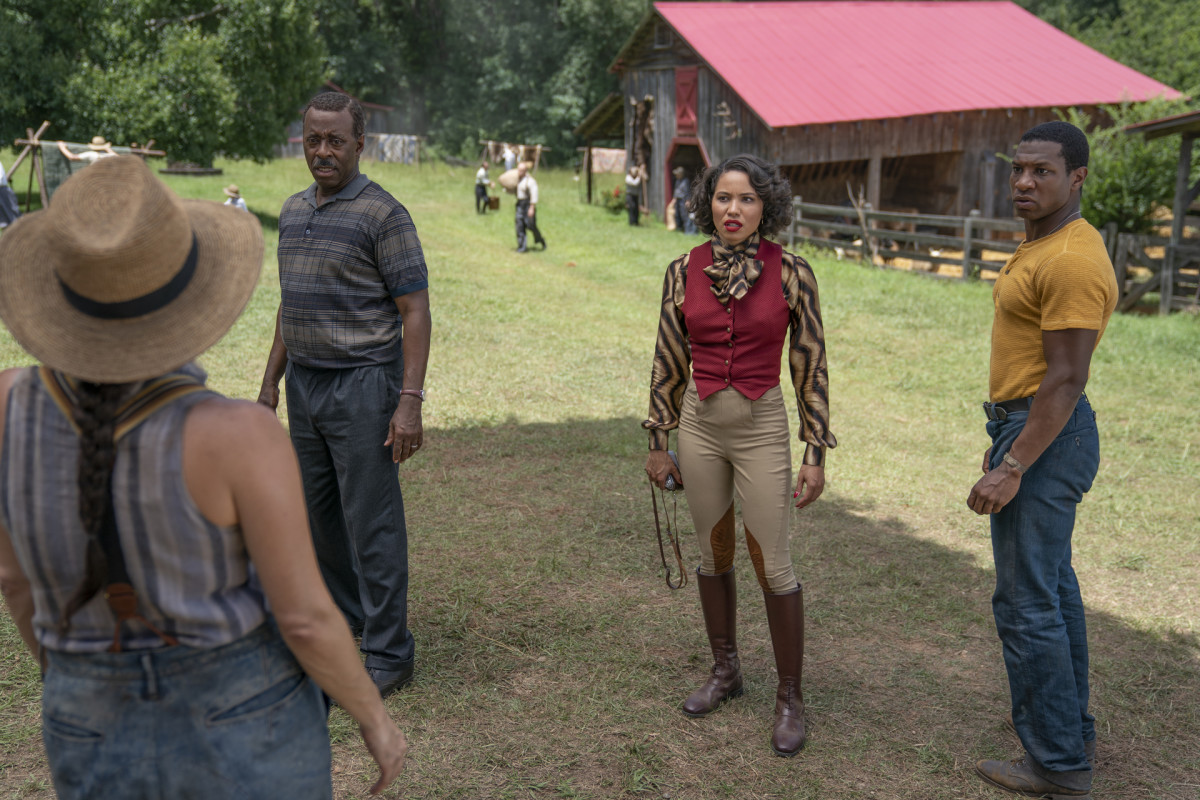 In what almost felt like a dream sequence at the Braithwaite manor, Leti and George open the second episode, "Whitey on the Moon," giddily trying on outfits in a montage set to the "The Jefferson's" theme song, "Movin' on Up." Pink is a bit wistful that Leti luxuriating in jewel-toned gowns, lush robes and "big feather hats" weren't featured in wider shots — but, thankfully, her three-piece riding suit (above) received much-deserved longer screen time.

The costume designer surmises that, of course, an equestrian ensemble would sit within Leti's "fantasy closet" full of "perfect" occasion looks. She researched period-authentic riding outfits for the base, "then we're like, 'Ok, drop some magic into that,'" she says. She originally planned for a classic white ruffled shirt. But, after happening upon the psychedelic printed fabric, she pivoted to an intentionally anachronistic '70s-style pussy bow blouse — which required Leti to remove the vertical striped jacket with tails along the way. 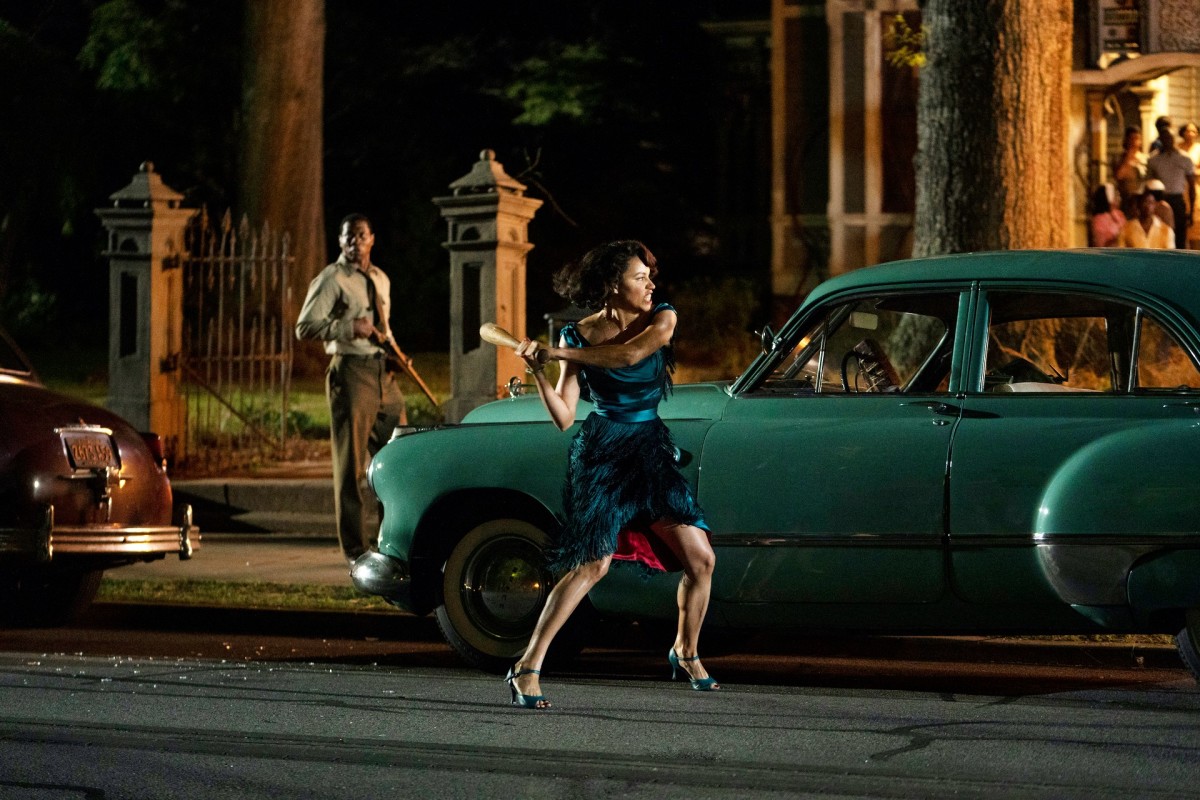 "Letitia f*cking Lewis" also broke some windows — along with the Internet — in the haunted house episode three, "Holy Ghost," with her bold actions and blue fringed housewarming dress (above), which took on a life of its own.

Pink began designing the bombshell look based off Leti's scripted movements during the eventful evening, which started with close dancing with another partygoer (thereby catching Tic's attention). She found a "crazy French fabric" to drape for the scoop-neck bodice, then looked to a '50s-authentic long column gown for the audacious fringe.

The iridescence of the teal, leg exposing length and lush fringe enhance and move with Leti's physicality, as she claims her right to be in her house in the majority-white North Side by taking a baseball bat to her racist neighbors' cars after finding a burning cross on her front lawn.

"That dress was an exclamation point to everything she was doing," says Pink. 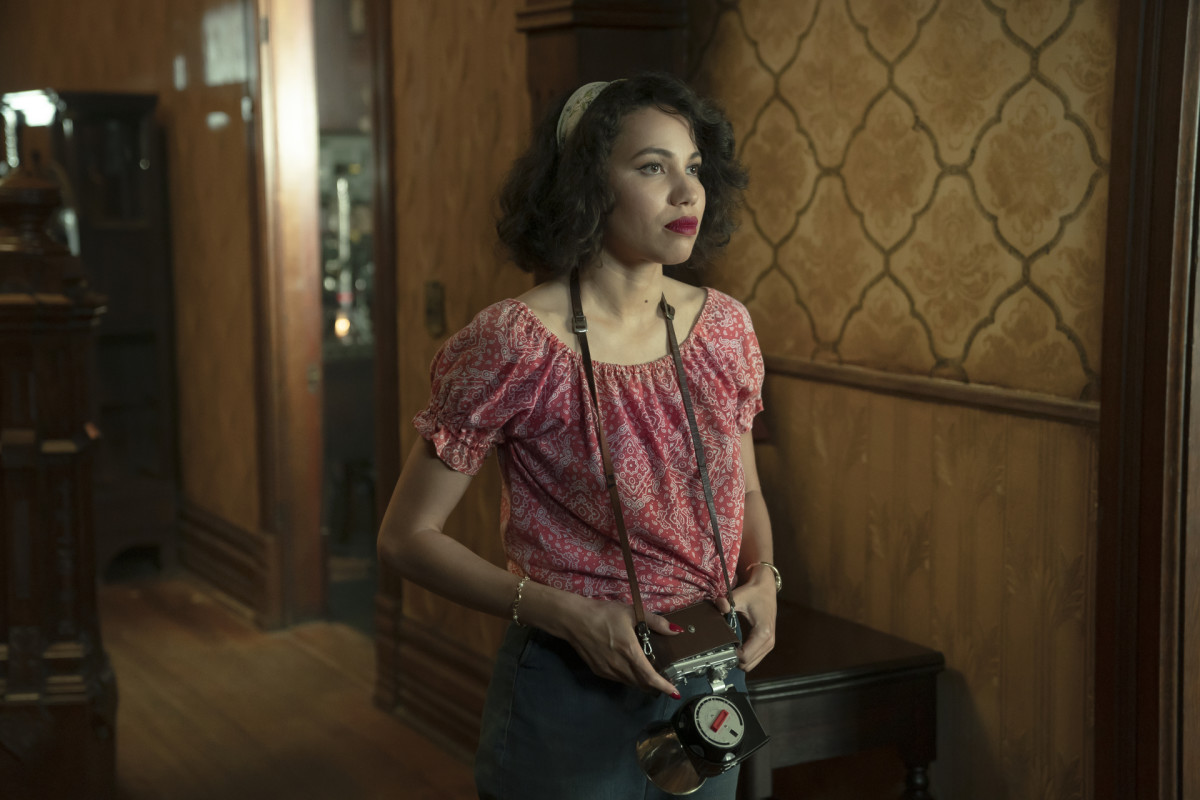 Leti at home in her haunted house.

During quiet moments, like moving into her new house or developing film in her basement, Leti lets down her guard in cuffed jeans, cute tops and sneakers.

"Those are just pieces she has that are of comfort to her," explains Pink. "At that moment, she's not putting on her armor."

But, of course, even Leti's functional outfits — like the pale yellow jumpsuit (below) she wears in for the midnight mission in Boston, in episode four — aren't your standard utilitarian wear. Inspired by a similar vintage '50s piece, Pink custom-designed and made 10 versions of the zippered, short-sleeve boilersuit to account for all the action Leti, Tic and Montrose (Michael Kenneth Williams) see during their search for the missing pages from the "Book of Names." 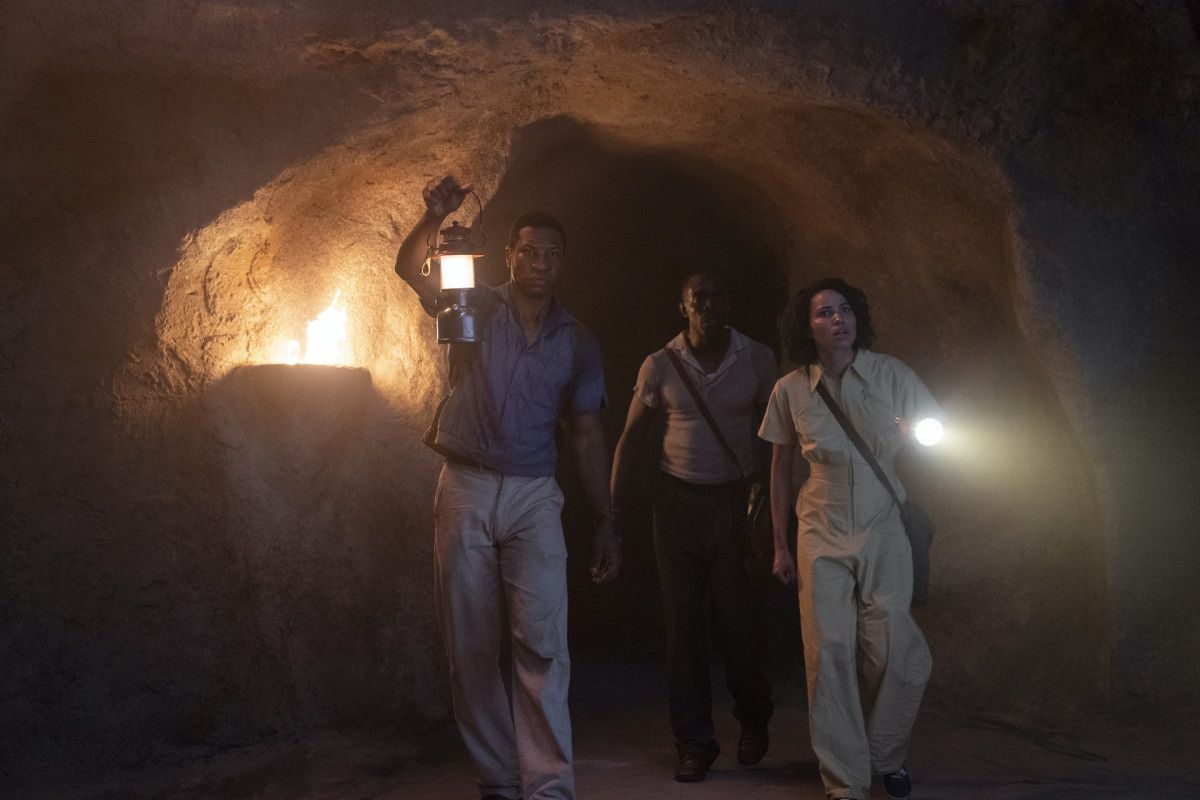 Tic, Montrose (Michael Kenneth Williams) and Leti in search of their holy grail.

"There's so much action — and they're all wearing their adventure bags... That's the Indiana Jones of it all, right there," says Pink, about opting for the jumpsuit over the standard jeans-and-shirt for the mind-boggling, circular survival course that leads back to Leti's basement.

During Leti's road trip, sister Ruby continues to seek, in vain, a sales associate job at Marshall Field department store. After her repeated and failed attempts at breaking through racist hiring practices, she changes out of her beige-striped job interview skirt suit and into a sexy pink ombré spaghetti strap sequin gown (below) to channel her frustrations and anguish into a soulful, moody set at Dick Vesey's bar.

"She's so beautiful and so sexy and we wanted to portray that. I wanted you to see her shape," explains Pink. She based the pink sparkle dress on a period authentic ombré sequin fabric she found in her photo research. "It just seemed so modern to me. It just didn't seem period. That's OK," Pink says of the bold, sultry look, which punctuates Ruby meeting William (or whom we think is William) at the bar and their hot staircase sex scene later. 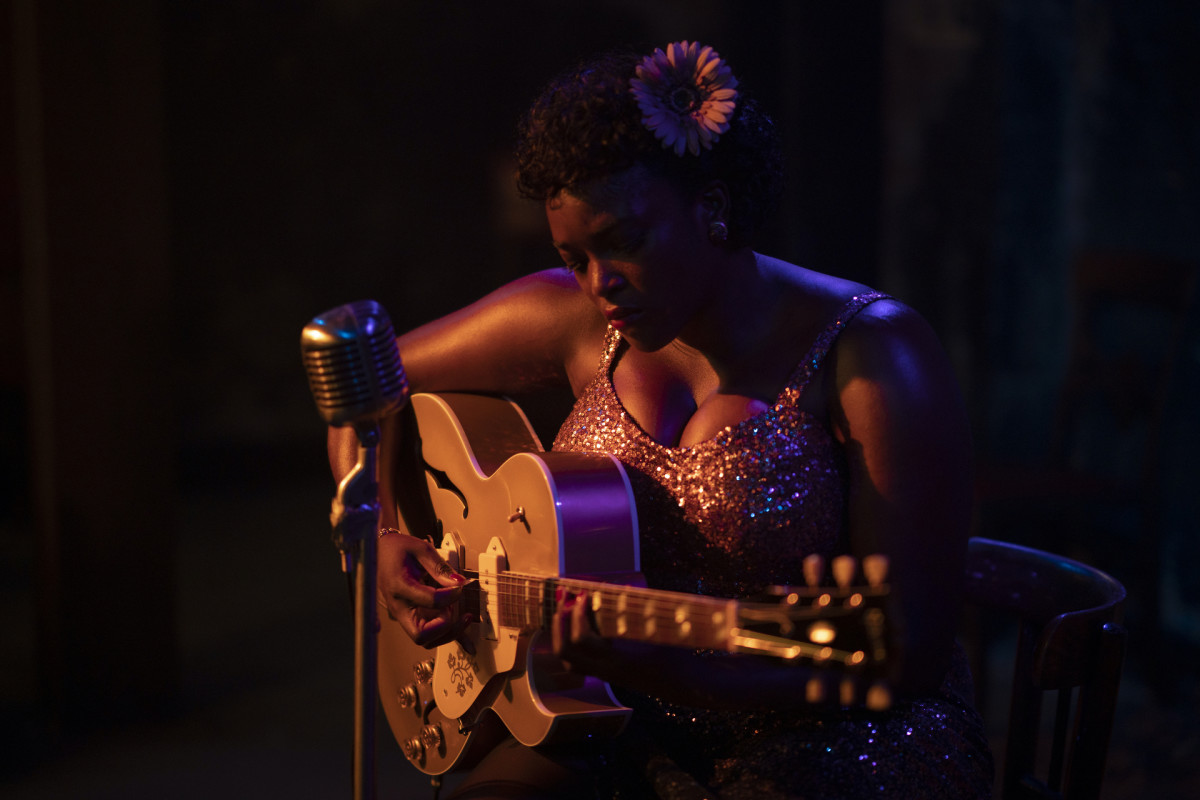 Ruby sings to an unappreciative audience.

Ruby's vibrant, body-celebrating looks also contrast with the conventional '50s fit-and-flare black and white dress she dons later, after deciding to partake in William's — erm, Christina's — shape-shifting potion. "I enjoyed my entire day using the only currency that I needed: whiteness," as Ruby says to William, after her day of experiencing the privileges of being a white woman in Jim Crow America. (Pink also confirms there are "breadcrumbs" crossed-over in William and Christina's costumes to connect the two. I spot cravat flourishes.)

As "Hilary Davenport" (Jamie Neumann, who appeared in episode two as creepy dog wrangler, Dell), Ruby is immediately offered the job at Marshall Field and at a higher level, no less. With Cardi B's "Money" anachronistically setting the tone, Hilary confidently saunters into her interview in a red, collared and tea-length skirt suit that Ruby would probably never wear.

"So it's like, how did Ruby see this white woman?" explains Pink. "She's then dressing as what she would want you to see her as: very pristine and very buttoned up." 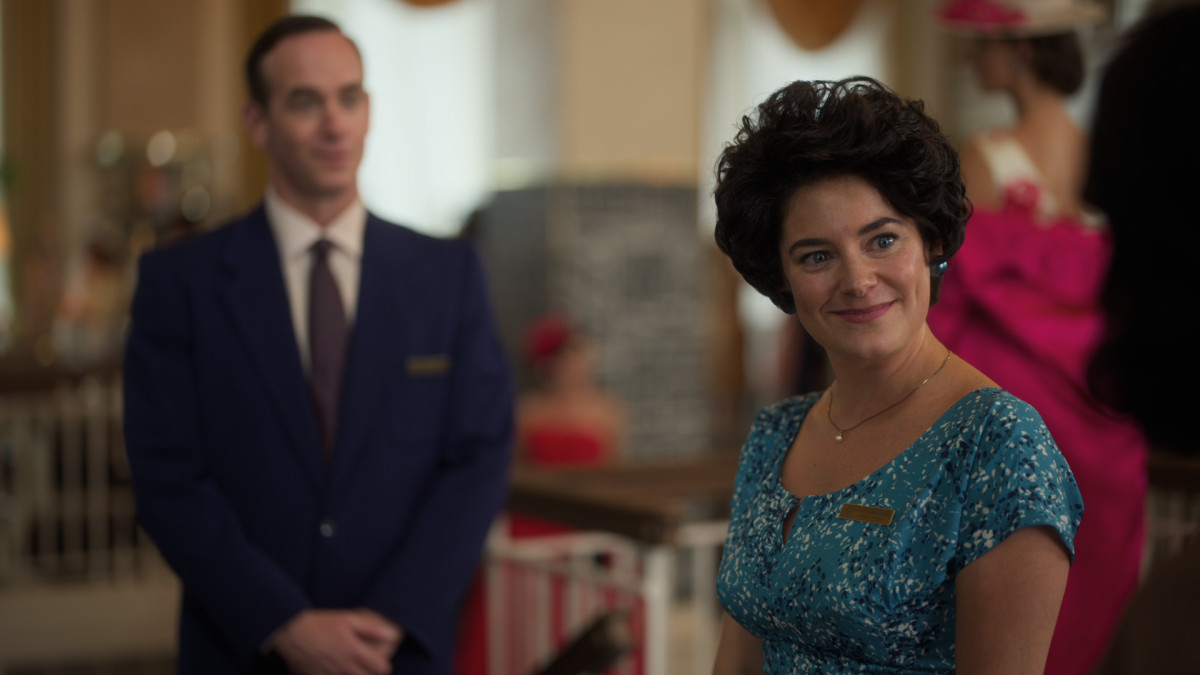 Pink custom-built most pieces in the series to maintain the color palettes of each character and create the "mashup" of historical accuracy and heightened elements, when required — and, well, blood. (Lots of it.) Although, Pink did "pop" some special, hard-to-replicate vintage into Leti's wardrobe.

"We would find pieces that were so amazing and so much a part of history that there's no way I could do justice to recreating those ribbon dresses and crocheted pieces," she says.

Pink also delighted in finding period-authentic vintage fabrics to custom-build pieces. For instance, Montrose wears a sheer white button-front shirt (below) to the drag club with Sammy, who shines in a bespoke gold rosette cape, inspired by real drag celebrations from the period.

"Montrose, in general, has some swagger," the costume designer says, also pointing to the yellow collared knit shirt he wears when he emerges from the ground in episode two. "That was old fabric from the '40s, they don’t make that fabric anymore. We over-dyed it, so it was a very chartreuse-y, really intense yellow. Because he's coming out of the dirt at night and you needed that shine." 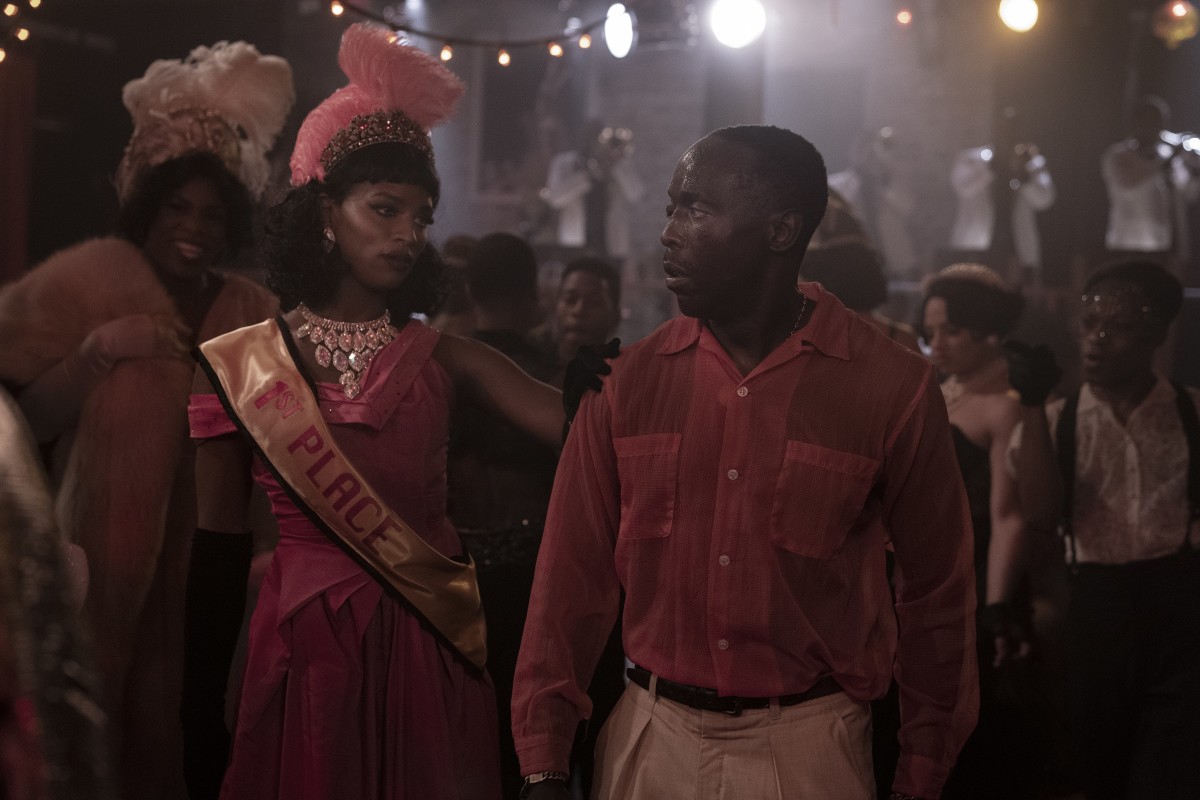 While Pink took some creative license with the heightened — and other-worldly — moments, she was very careful with historical depictions. In the haunted house episode, the children gather upstairs with the ouija board. In a devastatingly foreboding moment, a young boy asks about his upcoming trip south and wears a black and white tie, neatly clipped with a tie bar onto his white button down shirt — mirroring Emmett Till in a 1950 photograph taken with his mother.

"There are moments where it's very important for us to respect what it was. To me, those Gordon Parks photos were one of those moments," says Pink. "Even the people in the background and the colors; the woman's bra strap is coming out of her dress when she's standing in front of the theater. All the little details, we tried to respect each and every one of them."