In Pics: Kangana Ranaut Takes Stock of Demolition Carried Out by BMC at Her Property 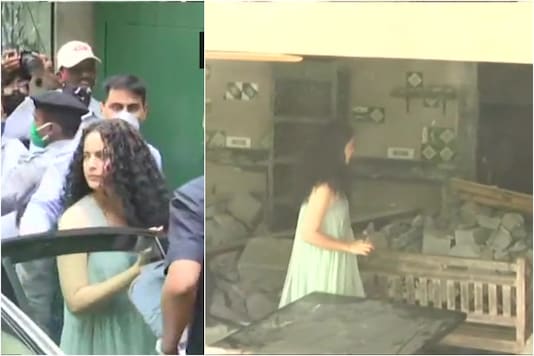 Kangana Ranaut reached her Pali Hill property in Mumbai on Thursday to take stock of the situation after BMC demolished some portions of the building citing illegal modifications. News18.com Last Updated: September 10, 2020, 4:24 PM IST FOLLOW US ON:

Kangana Ranaut reached her Pali Hill bungalow on Thursday evening to take note of the demolition that was carried out by BMC officers while she was en route Mumbai from Manali.

Kanagana visited the site and was clicked amid the rubble that was left in the wake of destruction carried out on Wednesday. She was snapped with her sister Rangoli Chandel, who reached the spot sometime earlier in the day. Take a look at some pictures from the site as Kangana takes stock of what has been destroyed in the demolition drive carried out by BMC at her office-cum-bungalow in Bandra.

Shortly after BMC started the demolition on Wednesday at Kangana's office, Bombay High Court stayed the operation. The court also asked BMC to file a reply to her petition in the matter. Kangana, through her lawyer Rizwan Siddiqui, had moved the High Court against the demolition of what the BMC had termed as "illegal alterations" at her office.

In a recent development, a police complaint has also been registered against Kangana for defaming Maharashtra CM Uddhav Thackeray. A Bombay High Court lawyer has filed the complaint on the basis of a FB post issued by Kangana, in which she links Shiv Sena's state government with 'movie mafia'.