John Cena, BTS to Feature Together on Tonight Show Starring Jimmy Fallon And Fans Are Freaking Out

The global K-pop sensation BTS will appear on The Tonight Show for an entire week's worth of performances, sketches, and interviews. 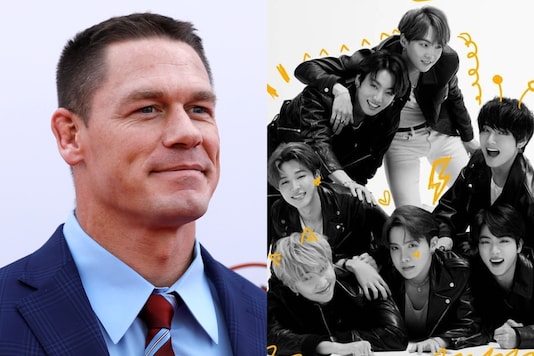 The global K-pop sensation BTS will appear on The Tonight Show for an entire week's worth of performances, sketches, and interviews. News18.com Last Updated: September 23, 2020, 8:21 AM IST FOLLOW US ON:

NBC announced that The Tonight Show Starring Jimmy Fallon will be celebrating "BTS Week" between September 28-October 2. Each episode will feature a musical performance by BTS, including a rendition of their chartbuster "Dynamite," the group's first fully English-language song.

“I’m so excited to have BTS back on the show. We just started the new season and we’re working on a lot of really exciting things,” Fallon told Entertainment Weekly in a statement. “One thing that is important to us at The Tonight Show is showcasing talent and creatives, so what better way to kick things off than a full week with them. And this is just the start."

BTS Week will also see RM, Jin, Suga, J-Hope, Jimin, V, and Jungkook participate in comedy bits and a virtual interview with Jimmy Fallon. The episodes will, however, also feature other guests. NBC has announced John Cena as the lead interview guest for that night’s broadcast. Cena has publicly supported BTS on multiple occasions, and the members have reciprocated the respect and admiration.

During a February edition of “The Tonight Show Starring Jimmy Fallon,” BTS told the host that John Cena is the fellow celebrity they would most like to meet.

Needless to say, the BTS Army is going gaga over this news. One user wrote, "JOHN CENA X BTS THIS IS NOT A DRILL I’VE BEEN WAITING FOR THIS DAY." Another said, "I made myself cry watching them talk about John Cena last time they were on the Tonight Show and Chimmy Fallon said he was gonna connect them and now BTS and John Cena will both be on The Tonight Show next week." (sic)

Check out some of the best reactions here:

Hope John Cena gets to talk to the boys. Wanna see everyone's reactions

JOHN CENA WILL APPEAR ON THE SECOND DAY OF THE BTSWEEK ..... JIMMY FALLON REALLY KEPT HIS PROMISE

The Tonight Show has played host to similar events, like 2017's Miley Week. In 2018, Ariana Grande featured as Fallon's one and only guest for an entire episode. That same year, Cardi B became the first celebrity to co-host The Tonight Show with Fallon.