Let That Sink in, Says Shibani Dandekar As She Posts Pic of 'Hounded' Rhea and 'Guarded' Kangana

Shibani Dandekar has been a constant support for Rhea Chakraborty. Earlier, she penned a long note on Instagram, calling out the press for allegedly misbehaving with Rhea. Armed with the 'Y-plus' security cover, Kangana Ranaut returned to Mumbai in the middle of her ugly tussle with the Maharashtra government and Shiv Sena on Wednesday. She landed in the city shortly after scoring a win against Shiv Sena-led BMC, which had started demolishing alleged illegal structures at her Pali Hill bungalow.

The demolition drive drew sharp responses on social media, with messages of support for Kangana flooding the internet, with some equating her with Rhea Chakraborty, accused of abetting the suicide of actor Sushant Singh Rajput, saying how the two women are fighting back systems and prejudices. Now, Rhea's close friend, actress Shibani Dandekar has slammed the equivalence of the two by sharing a picture wherein Rhea is being hounded by the press, whereas Kangana is guarded by a posse of elite commandos of the CRPF.

"Let that sink in," Shibani captions the picture. Shibani has been a constant support for Rhea. Earlier, she penned a long note on Instagram, calling out the press for allegedly misbehaving with Rhea. Shibani also wrote, "I stand with you and by your side always. @rhea_chakraborty" 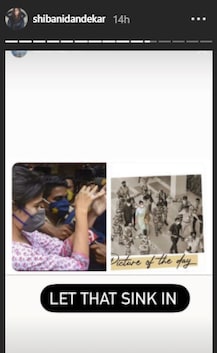 After three days of interrogation, the Narcotics Control Bureau (NCB) on Tuesday arrested Rhea in a drug case linked to actor Sushant Singh Rajput's death, following which she was sent in judicial custody till September 22 by a local court.