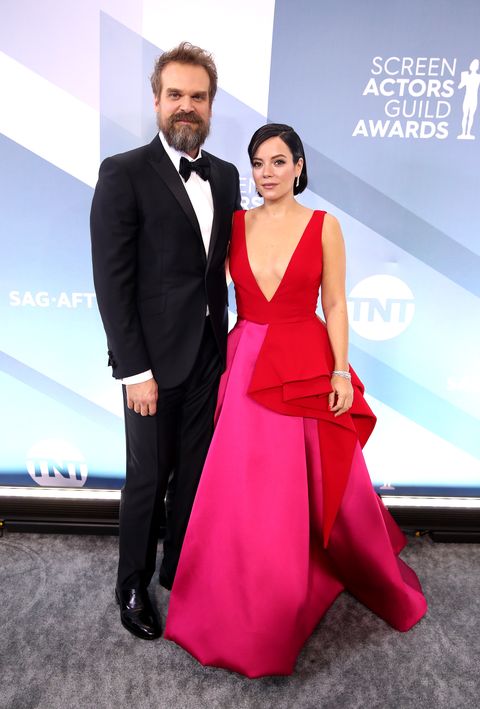 Lily Allen and David Harbour got a marriage license in Las Vegas, Nevada. They made their red carpet debut as a couple in October 2019, and Lily confirmed their engagement in May.

It's been a whirlwind of a year for Lily Allen. The chaos of 2020 aside, Lily and Stranger Things star David Harbour started dating this time last year, made their relationship red carpet official one month later, reportedly got engaged in December 2019, confirmed they were engaged in May 2020, and just secured a marriage license.

According to public records obtained by Page Six, Lily and David are one step closer to tying the knot and making everything legally official. Though they have a marriage license, they're not technically married yet. Apparently, they have until September 6, 2021 to hammer out all the details, get married, and file for a marriage certificate.

That said, TMZ reports there is a slight chance they could get married first and then apply to make it all official afterward if they simply can't wait any longer.

Lily and David's reps haven't confirmed this news, so fans may have to wait a bit to really get excited for their wedding. After all, Lily didn't confirm she was engaged until about six months after the fact.

Lily, David, and her two daughters, Ethel and Marnie, have been hanging around New York City lately, and though it's not totally clear what the wedding plans are, perhaps they'll head west for a classic Vegas chapel wedding. Time will tell! In the meantime, congrats to Lily and David for this milestone!