Senior BJP leader Devendra Fadnavis dismissed speculations that the ruling NDA in Bihar may rope in Bollywood actress Kangana Ranaut as one of its star campaigners for the upcoming assembly elections in the state. 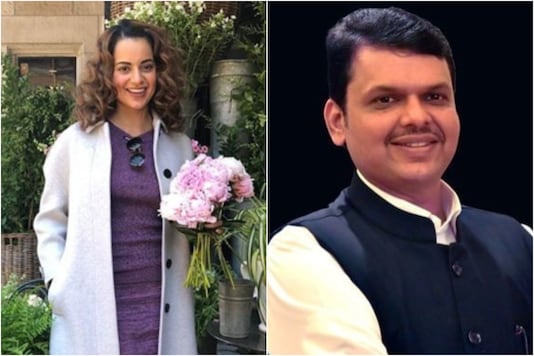 Senior BJP leader Devendra Fadnavis dismissed speculations that the ruling NDA in Bihar may rope in Bollywood actress Kangana Ranaut as one of its star campaigners for the upcoming assembly elections in the state. PTI Last Updated: September 14, 2020, 7:43 AM IST FOLLOW US ON:

Senior BJP leader Devendra Fadnavis on Sunday dismissed speculations that the ruling NDA in Bihar may rope in Bollywood actress Kangana Ranaut as one of its star campaigners for the upcoming assembly elections in the state. Fadnavis also took potshots at Uddhav Thackeray, who has succeeded him as Maharashtra chief minister, saying that the Shiv Sena chief seemed to be "more interested in fighting Kangana than battling corona".

"We need no other star campaigner as the NDA has, in Prime Minister Narendra Modi, the biggest star campaigner," Fadnavis, who has been appointed as the BJP's election in-charge in the state, told reporters in Gaya, Bihar. He was responding to queries about reports in a section of the media that Ranaut, who is considered sympathetic towards the BJP, might canvass for the ruling coalition in Bihar in the assembly elections due in October-November.

About Ranaut's spat with the Shiv Sena government in Maharashtra following the demolition of a part of her house in Mumbai by the municipal authorities, Fadnavis said, "Uddhav Thackeray needs to concentrate more on battling corona, by which the state has been the worst hit. But he seems to be more interested in settling scores with Kangana." Ranaut has been at loggerheads with the Shiv Sena government following her outburst over the death of Patna-born actor Sushant Singh Rajput. The governments of Maharashtra and Bihar had also engaged in a tug of war after the deceased actor's father KK Singh lodged a complaint at a Patna police station, accusing actress Rhea Chakraborty and others of cheating and abetting his son's suicide.

The Maharashtra government supported Chakraborty's contention that Bihar had 'no jurisdiction' in the matter and took exception to the Nitish Kumar government recommending a CBI probe, which was later upheld by Supreme Court. Fadnavis, who has been touring Bihar since Friday, asserted that "there were no big or little brothers in the NDA" and that the JD(U), BJP and the LJP will contest the elections together and achieve a huge victory.

He made the remark in response to queries about the acrimony between Janata Dal (United), headed by Chief Minister Nitish Kumar, and Lok Janshakti Party (LJP) which was founded by Union minister Ram Vilas Paswan and is now headed by his son Chirag Paswan. The BJP leader also paid rich tributes to former Union minister Raghuvansh Prasad Singh, saying that he was an "ajeya yoddha" (unvanquished warrior).

Raghuvansh Prasad Singh, who recently resigned from the RJD, died at AIIMS, New Delhi, on Sunday.