Shibani and Anusha Dandekar continue to support their close pal Rhea Chakraborty in Sushant Singh Rajput case as they demand justice for her and release from judicial custody. 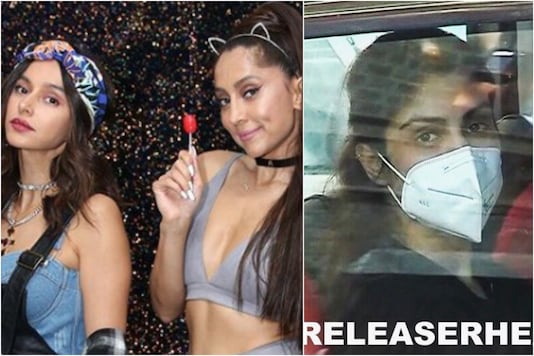 Shibani and Anusha Dandekar continue to support their close pal Rhea Chakraborty in Sushant Singh Rajput case as they demand justice for her and release from judicial custody. News18.com Last Updated: September 14, 2020, 9:02 PM IST FOLLOW US ON:

After Rhea Chakraborty's plea seeking bail in Sushant Singh Rajput case was rejected by a sessions court judge in Mumbai, the actress and the other accused have been placed in judicial custody for 14 days. Rhea and Showik Chakraborty, Samuel Miranda, Dipesh Sawant and others are expected to move High Court on Monday for bail.

Meanwhile, many Bollywood celebrities have come out in support of Rhea as they fear that she is being made a soft target in the investigation and hounded by the media. Vidya Balan, Farhan Akhtar, Sonam Kapoor, Kareena Kapoor Khan, Huma Qureshi, Hansal Mehta, Anurag Kashyap, Zoya Akhtar and others have supported Rhea, including the Jalebi actress' close friends Shibani and Anusha Dandekar.

On September 11, when Rhea and other accused in Sushant's case were taken into custody, an image of the actress inside a car went viral with many sharing the snap with the hashtag 'Release Rhea'. Anusha and Shibani too had shared #ReleaseRhea posts on Instagram as they stood by her side. However, it was reported that both Dandekar sisters have deleted #ReleaseRhea posts from their social media handle recently. But, it is not true as #ReleaseRhea posts still appear on their respective Instagram accounts.

Here's the viral post from Shibani and Anusha's timeline on social media.

Currently, Rhea is reportedly lodged in Byculla jail. Her brother Showik too stands arrested by the NCB. The anti-drugs federal agency is also raiding and placing more suspects in custody in Mumbai and Goa over their involvement in drugs peddling and distribution among celebrities in the film and TV industry.