Bollywood actress Deepika Padukone has returned to Mumbai from Goa. She will be joining the NCB investigation on Saturday. 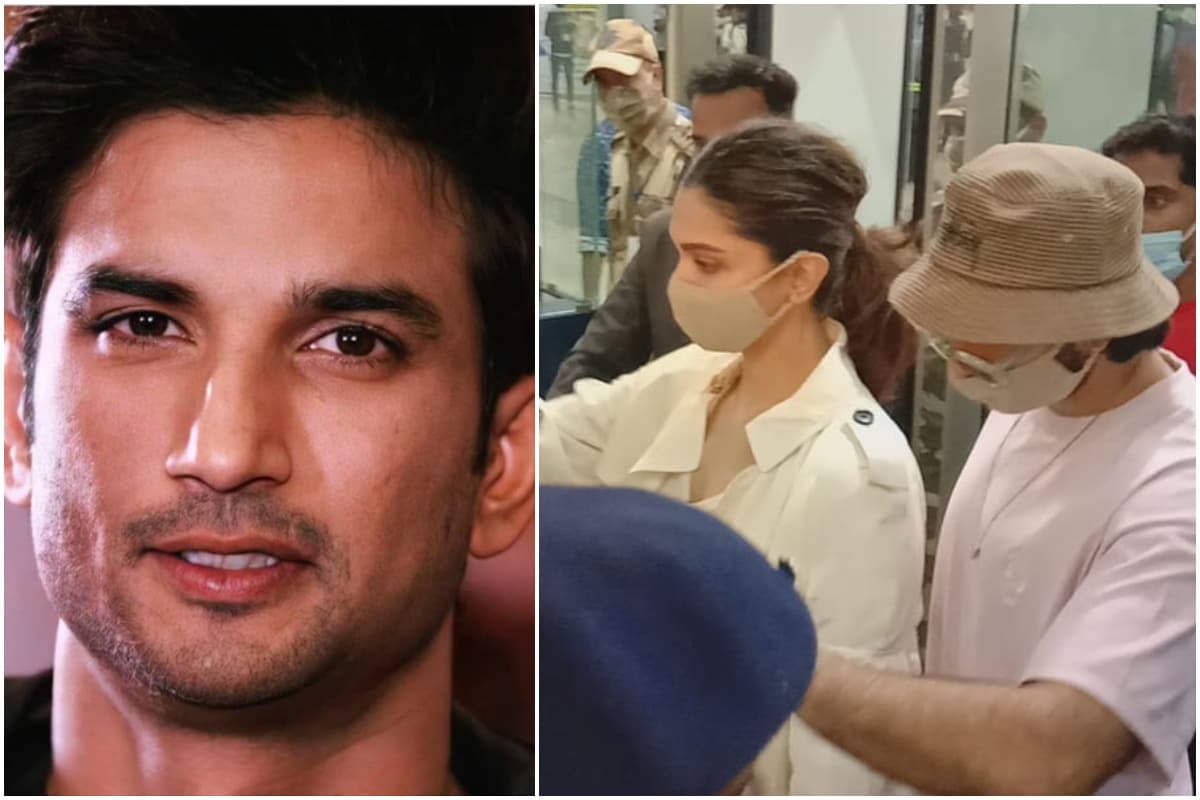 Event Highlights The Narcotics Control Bureau (NCB) on Wednesday said that it has summoned Bollywood actors Deepika Padukone, Sara Ali Khan, Shraddha Kapoor, Rakul Preet Singh and fashion designer Simone Khambatta for questioning in a drug-related case. Deepika, who was in Goa to shoot for an upcoming film, left for Mumbai on Thursday. Deepika, along with her manager Karishma Prakash, has been called for questioning on September 25 and Sara and Shraddha have been called on September 26. Rakul has skipped questioning today and will join the probe on Friday. Simone Khambatta was questioned by the NCB for over four hours on Thursday. Deepika has acknowledged the summons and had submitted for joining investigation on Saturday. Tomorrow Rakul Preet and Karishma Prakash will be joining the investigation, say NCB sources.

Bombay High Court on Thursday adjourned hearing in bail pleas of Rhea Chakraborty and her brother Showik till September 29. Rhea's judicial custody was extended for another two weeks and the actress will be in jail till October 6. She and her brother Showik Chakraborty had requested bail from the Bombay High Court. Rhea was arrested on September 8 on drug charges linked to the Sushant Singh Rajput death investigation.

Deepika Padukone and Ranveer Singh have returned to Mumbai, where Deepika will be joining the NCB investigation on September 26.

According to NCB, Padukone has submitted to join the investigation on 26th September, in connection with a drug case related to Sushant Singh Rajput death pic.twitter.com/wN8bOcYn6s

Deepika Padukone and Ranveer Singh at Goa airport, on their way to Mumbai. Deepika will join the NCB probe into alleged Bollywood-drugs nexus on Saturday, an official said on Thursday. Deepika Padukone has acknowledged the summons and had submitted for joining investigation on Saturday. Tomorrow Rakul Preet and Karishma Prakash will be joining the investigation, say NCB sources.

Rhea Chakraborty's bail plea hearing begins in Bombay High Court. "In my petition, I have said NCB has no jurisdiction. All cases to be transferred to CBI, as per SC judgement," her lawyer Satish Maneshinde argues in HC.

Deepika Padukone's team has confirmed to the NCB that she will be joining the drugs probe on Friday. She will be coming back to her residence in Mumbai from Goa today and is likely to appear before the NCB during the first half of the day tomorrow. Deepika's manager Karishma Prakash too has been summoned along with her employer.

#Alert - Deepika Padukone's team tells NCB that she will join the probe on Friday.@Zebaism with details

Actress Deepika Padukone will be reaching Mumbai from Goa to join the ongoing drugs probe. Meanwhile, security has been beefed up outside her house keeping in mind the media frenzy around her summoning by the NCB.

A team of NCB officials has obtained permission from court and will be going to Taloja jail to further question Showik Chakraborty and Sushant Sing Rajput's house staffer Dipesh Sawant there. Showik's connections with drug peddlers in Mumbai and Goa have been under the NCB scanner since the start.

NCB continues to grill fashion designer Simone Khambatta and Sushant Singh Rajput's manager Shruti Modi in the ongoing drugs probe on Thursday. It is said that Simone's name has come up during Rhea Chakraborty's questioning.

Here's a list of five questions that NCB will be looking to ask Deepika Padukone, who appears before the agency on Friday.

-- Does KWAN provide services beyond talent management to stars?

-- Do you know people who supply drugs on a regular basis?

-- Were you part of the WhatsApp group that discussed drugs supply?

-- Was Rhea Chakraborty part of any WhatsApp group with you?

-- Were you aware of any drug use by Sushant Singh Rajput?

Here are 6 questions that NCB may ask the Actor.

CNN News18 has learnt that Rakul Preet Singh is in constant touch with her team of lawyers. She is currently in Hyderabad herself and has ackowledged the NCB summon in the ongoing drugs probe in Sushant Singh Rajput case. She will appear for questiong before the anti-drug agency on Friday.

Drug peddler Karamjeet has named several TV actors during questioning by the NCB in drugs probe. Karam has claimed that he used to supply drugs to close to 150 actors from TV and film industry. Meanwhile, TV actors Abigail Pandey and Sanam Johar are being questioned by the NCB for the second day straight on Thursday.

Here's a list of questions that NCB is likely to ask actress Rakul Preet Singh.

-- Did you procure drugs from Rhea Chakraborty?

-- Do you know people who consume and supply drugs?

#BollywoodDrugLink – Take a look at the key questions that NCB is likely to ask Rakul Preet Singh.

Apart from film celebrities, TV actors are also under NCB scanner in the ongoing drugs probe. Abigail Pandey and Sanam Johar have already been summoned by NCB and 5 more TV actors, named by a drug peddler during investigation, will also be brought in for questioning.

#NewsAlert – More TV actors to be summoned by the NCB.

5 more TV actors apart from Abigail Pandey and Sanam Johar to be quizzed by the NCB. @Zebaism reports from outside the NCB Office in Mumbai.

Rakul Preet Singh has acknowledged the NCB summon as per the agency's latest statement. She is said to be in Hyderabad for a film shoot and may skip questioning today.

Deepika Padukone is expected to reach Mumbai by 2 pm on Thursday. She is currently in Goa for a film shoot, which has now stopped production. She is said to take a chartered flight out of Goa so that she can reach Mumbai city to appear before NCB on Friday.

The NCB has clarified that it had issued summon to Rakul Preet Singh on Wednesday itself to appear before it on Thursday but she has not responded yet. Meanwhile, her team has said that she did not receive any summon in Mumbai or Hyderabad in the ongoing drugs probe.

Summon was issued to Rakul Preet Singh yesterday. We tried to contact her through various platforms, but she has not responded yet: Narcotics Control Bureau (NCB) https://t.co/K7OxDkKiJS

Rhea and Showik Chakraborty's bail hearing will come up in Bombay High Court on Thursday, They have been placed in judicial custody till October 6. In her bail, Rhea has stated that further custody will take a toll on her mental health and well being. She was placed in custody first on September 9, and her bail rejected for first time on September 11.

Sources have revealed to CNN News18 that Deepika Padukone is currently having discussions with her team of lawyers on how to respond to NCB summon in ongoing drugs probe. She had gone to Goa for a film shoot but has now called off all work and is likely to arrive in Mumbai today afternoon. She is called in by the NCB on Friday.

#NewsAlert – Deepika Padukone still in consultantion with her lawyers. She is likely to leave for Mumbai from Goa at 2 PM today: Sources. #BollywoodDrugLink pic.twitter.com/5al3YCHPxh

Rakul Preet Singh's team has said that she has not received NCB summon in the ongoing drugs probe in Mumbai or Hyderabad, where she is currently shooting for a film. Hence, she is unlikely to join the investigation today. Meanwhile, fashion designer Simone Khambatta has joined reached the NCB office in Mumbai in response to her summon.

Bollywood actresses who have been summoned by the NCB in the ongoing drugs probe in Sushant Singh Rajput case are said to be seeking advice from their lawyers before appearing in front of the authorities. Rakul Preet Singh is called in by NCB on Thursday, followed by Deepika Padukone on Friday and Sara Ali Khan and Shraddha Kapoor on Saturday.

#EXCLUSIVE – Conducting through probe in the Bollywood-Drug Angle case. Summons does not make anyone an accused: Top NCB Sources.@shilparathnam & @Zebaism share more details with @vandanaseb.

Akali Dal spokesperson Manjinder Singh Sirsa has justified the summoning of Bollywood actresses Sara Ali Khan, Deepika Padukone, Shraddha Kapoor and Rakul Preet Singh in the drugs probe. He says that there should not be different yardsticks for a normal citizen and an A-list movie star.

#BollywoodDrugLink – This is a big nexus and everyone will be exposed, if the Mumbai Police had done their job a year back when I released that video. This drug cartel would have been behind bars and Sushant Singh Rajput would have been alive: @mssirsa tells @vandanaseb. pic.twitter.com/KUzr0dtSjI