That “Will You Shut Up, Man?” Moment Hits Me Right in My Lady Parts 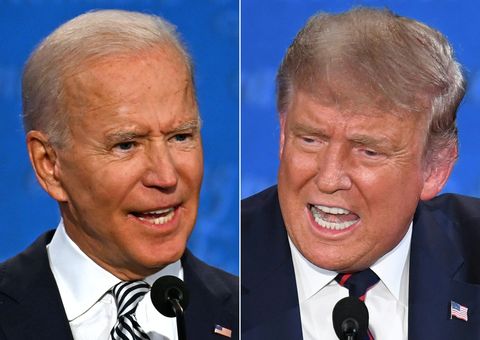 Remember when the field of candidates vying for the Oval Office was the most female in history? Now we’re trapped inside a frat house basement and the keg’s tapped. Sigh.

The moment from 2020's first presidential debate that of course instantly trended on Twitter, that will undoubtedly end up on a t-shirt and all over headlines in the morning, that will be replayed on cable news, late-night shows, and SNL until our eyes bleed—the one where, understandably exasperated with President Donald Trump’s constant talking-over and interrupting, democratic presidential nominee Joe Biden said, “Will you shut up, man?”—was the most singularly male thing in this, the most singularly male election. Sigh, again.

And this was just in the first segment of tonight’s 90-minute debate.

Think about it. What if then-democratic presidential nominee Hillary Clinton had said something similar when Trump was doing literally the exact same thing during the 2016 debates? I mean, she couldn’t even turn around and tell him to stop *stalking her* on the stage back then because what would America think of her?

Or, what if one of those women running for the Democratic nomination—Senator Kamala Harris, perhaps, Biden’s vice presidential running mate—had won the party ticket and was standing on tonight’s Case Western Reserve University stage? The reactions would have gone something like this:

She lost her cool. I can’t believe she let him get the best of her.God, what a bitch.She’s so unlikeable, isn’t she?See, women are too emotional. I’d hate to be her husband…

Actually, you know what? This list isn’t even that good, so I’m gonna stop. Because you know, and I know, the words on this list would be a hell of a lot bleaker, more chilling, too vile. So let’s not even go there. Let’s go here:

Have you ever been in a professional setting (reminder: these men are literally at work rn) where women were telling each other to shut up? Where women were either laughing at each other’s responses to questions during a meeting or just fully interrupting and calling each other "liars?"When they were incessantly shouting over someone but the only response was just politely asking (i.e. more shouting) that they just let you finish your question and then they can keep shouting?

"Joe has the biggest mask I've ever seen!"

Translation: what a pussy! Trump carries a mask in case he needs it, of course. He’s not opposed to masks, but he’s not, like, a giant wuss, you know? BTW, Trump brought back football—he was very happy to do it. You’re welcome.

And yes, I know, we have a history-making vice presidential candidate in Harris. And the number of women working and fighting for these men behind-the-scenes is huge, just like the activists in the streets and women who are running for office, making an impact in ways that fill even the most hopeless-feeling (hi) with hope. That is more important than a bar fight.

But this is where we are. Watching two bros yell at each other and we can’t get a single word in.