In the video, it seems Sushant Singh Rajput is with close friends and relaxing at home. He is singing a devotional song while smoking. Rhea Chakraborty is also seen smoking in the video. 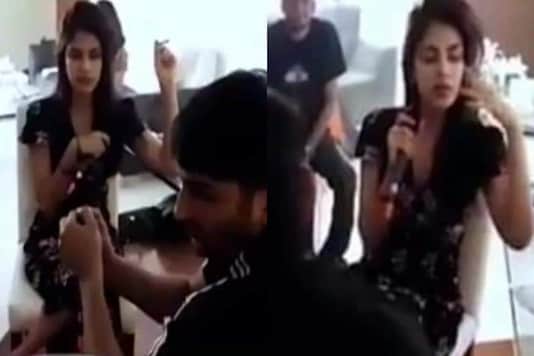 In the video, it seems Sushant Singh Rajput is with close friends and relaxing at home. He is singing a devotional song while smoking. Rhea Chakraborty is also seen smoking in the video. IANS Last Updated: September 12, 2020, 5:17 PM IST FOLLOW US ON:

A video featuring late actor Sushant Singh Rajput along with his girlfriend Rhea Chakraborty has emerged online, which shows them smoking what is referred to as rolled cigarettes. In the video, it seems Sushant is with close friends and relaxing at home. He is singing a devotional song while smoking. Rhea is also seen smoking in the video.

The authenticity of the video is to be established. At one point, one of the people present asks Sushant: "Is this Charas?" To this, Sushant says it is VFX, referring to the technology applied in cinematic entertainment to create visual special effects. Rhea joins in and says it is a rolled cigarette.

The person making the video says these are herbal sticks, following which Sushant again jokes and mentions it is VFX. In the video, Rhea says "I love you". To this, Sushant replies: "I hope so".

In the video, released by Zee News according to an india.com report, Sushant is singing a devotional song, and he seems to be intoxicated. The video also features his flatmates, Samuel Haokip, who is seen playing the guitar, and Siddharth Pithani, who also plays an instrument.

On June 14, Sushant was found dead in his home in Mumbai. At that time, Mumbai Police had concluded it was a case of suicide and investigated reasons that might have caused Sushant to end his life. Now, his death is being investigated by CBI, Narcotics Control Bureau (NCB) and Enforcement Directorate (ED).

Earlier on Friday, a Mumbai Special Court rejected bail applications of actress Rhea Chakraborty, her brother Showik and four others accused in a drug-related case filed by the Narcotics Control Bureau, as part of an investigation into Sushant's death.